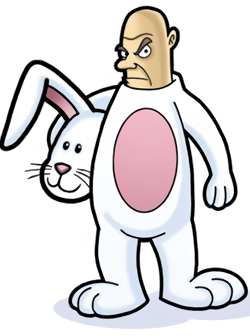 What are you looking at? So I'm a big giant bunny, woo hoo, just give me the whiskey and shut the hell up. I've had a rough week. You heard I lost that lousy job at the Gaming GigaBuys software store because some punk attacked me with a monkey the day Tribes 2 came out? Animal Services was all over my ass like a rash. How was I to know he was a monkey? I couldn't see a damned thing in that bear suit. I thought it was another brat trying to stuff me in a Pokeball, so I slammed him into the software shelves. Anyways, somehow this is MY FAULT. But they let me off with community service.

Yeah. So now I haveta be the neighborhood Easter bunny. I tried to get out of it. I told them I didn't believe in the Easter bunny. I said I was Jewish. I told them I swell up if I get near eggs. Didn't work. So yeah, lookat me, software store dropout. "Here comes Peter Cottontail / Straight from Marin County Jail..." Stop laughing! If I had opposable thumbs in this thing I WOULD CUT YOU.

Okay, hand me my basket of eggs. I have to go entertain the freaks in this neighborhood. If a guy with a monkey comes in here, hold him down and beat him for me.

AH, ANOTHER EGG! THANK YOU, I'LL SAVE IT FOR LATER.
Thanks, large bunny man. This egg will come in handy ... sometime. I'd eat it now, but I have this terrible quick-saving addiction which has caused me to habitually horde all of my ammo and powerups rather than use them. Here, look at this special refrigerator. It contains every single Easter Egg I've ever received since 1977, rack after multicolored, glimmering rack. You never know when I might need ... eggs. And I would hate to, you know, have used them ... frivolously.

AH! YOUR SACRIFICE OF RIPENED CHICKEN OVARIES HAS PLEASED THE MOST DIVINE SERVER ADMINISTRATOR
Indeed, ceremonial hare, this weekend marks a most important anniversary to celebrate. Yes, what was once dead was remade anew. That's right ... exactly ten years ago Linus Torvalds began work on Linux! Your gift shall not be in vain, I'll add another two megabytes to your mail account. Begone quickly and I shall make it three. Off. OFF!

VIRTUAL REALITY GAMING HAS SOME DEFINITE DRAWBACKS
Believe me, I love getting lost in a virtual world. There's nothing quite as immersive as my incredible VR setup, even though it causes occasional property damage. But woo-ee, did I get quite the scare tonight!

See, I was embroiled in an ultra-realistic game of Asheron's Call, wandering about in the 3D environment. Finally, I decided to take a break, so I took off the goggles and set them on the coffee table. And what do I see standing in the doorframe of my apartment but an enormous bunny! I'm not making this up. I looked down at the goggles and back at the door and realized that it was all a clever trick, see, I only THOUGHT I had taken the goggles off, but really I was still wearing them and standing in an amazing lifelike virtual representation of my apartment. How else could you explain why there was an enormous rabbitbeast standing in my doorway? "Happy Easter numbnuts, you wanna egg or you gonna stand there like a jag-off?" the bunny said, without moving his big bunny mouth.

Well, I had to think fast, and you know as well as I do that killing bunnies is worth phat rips of XP. So I pulled out my broadsword -- which for reasons I'd rather not discuss was lodged into the remains of my couch at the time -- and charged at him. "TO THE ABYSS WITH THEE!" I yelled.

To my surprise, the bunny fought back! He simply braced himself in the doorframe and leveled me with a vicious Foot of Fury to my chest. Eggs flew everywhere and I crashed to the floor with a thud, my sword skittering under the dining room table.

"That's it punk bi-atoch!" the bunny said, throwing off his white mittens and rolling up big furry sleeves. "The cops'll call this self-defense!" Then he stuck out his elbow and dropped onto me from above, ears flapping the whole way. He cracked a few ribs and I howled out in pain. I rolled on top of him and started beating his big bunny face with my fists, loud squeaking sounds emanating from the beast's grinning maw with each impact.

At this point my girlfriend came in and saw me locked in mortal combat with a giant bunny amidst a pile of broken eggs. "Don't worry, honey!" I shouted above the din. "None of this is real! That's not air you're breathing..." Then the bunny rolled me over and kneed me in the balls, which certainly felt real. "I AM THE CHOSEN ONE!" I hollered, sending the rabbit flying with a kick. He righted himself and struck a kung-fu pose -- then suddenly his torn rabbit ears perked up at the sound of police sirens, and he took off running.

"Follow the white rabbit!" I screamed at my girlfriend. But, instead, she opted to slap me silly.

Hi. I need to buy 16 dozen eggs, and a fifth of vodka. However, I can't reach my wallet.