I Spent Weeks Training My Monkey to Be the First to Grab Tribes 2 at the Store, but Things Went Oh So Very Wrong 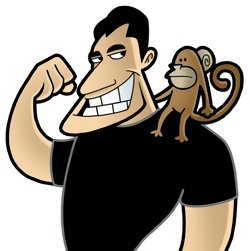 I knew that someday my extended experience in monkey-training would empower my gaming career. See, I'm a Tribes addict. I knew that my monkey's talents -- that is to say, squealing whenever someone tried to take our flag -- was just the tip of the simian iceberg.

See, for the last several weeks I've spent every afternoon at the Gaming Gigabuys store in the Metro Pointe mall ensuring that the very moment that Tribes 2 was available, I would have the first copy. Sierra, the publisher, made this easy for me; see, a while back they put up these fake Tribes 2 store displays that showed copies of the game, but they were only empty boxes. They weren't even labelled differently! It was a shitty thing to do to consumers, but a wonderful thing to do for us monkey trainers. Using those things for practice, I had the little guy trained as sharp as steel. He was in and out of that store in seconds, with a Tribes 2 box under his arm, every time. We cleaned out that whole display. I couldn't wait; the moment the store opened this morning, I was going to send in the monkey. I'd have a copy in my hands before they even finished raising up the steel grate that covered the mall entrance!

That was the plan, at least. I stood behind the fountain next to the Whattapretzel store, and as the Gaming Gigabuys guys started opening their storefront, I sent in the monkey.

See, in honor of the Tribes 2 release, Gaming Gigabuys had gone out and hired that Angry Moron in the Bear Suit to be the Gaming Gigabear again. He and I had once gotten into a fistfight over a plush Pikachu he sold me that I maintain had been under-stuffed.

Well, thanks to me playing Black and White with my monkey, he had been trained to attack other large animals on sight. So the little monkey stormed into the store, climbed up the Tribes 2 display, and then froze in his tiny little monkey tracks. There was this Giant Bear in the store. He wasted no time -- my monkey leapt from the display and attached himself to the bear's face.

"HOLY MOTHER OF HELL GET THIS GOT DAMNED KID OFF MY FACE!" the bear dude howled. Mistaking the monkey for a small child, he ripped it off and smashed him into the Pokemon card display.

That just set my monkey off, you know? Now it was personal. The monkey squealed so loud that the store's alarm sensors thought someone was breaking glass, so pretty soon alarms were sounding and mall cops were rushing up trying to find where they holstered their guns. Meanwhile, the monkey was latched onto the bears arm, biting him so hard he howled like a girl. Then, he suplexed the monkey in to the bargain bin. Copies of Lego Creator flew in all directions. So monkey went straight for the guy's balls. I couldn't see exactly how it all went down, but the bear stumbled into the Tribes 2 display whimpering. The cops managed to break it up right after he grabbed the Dreamcast display and sent it crashing down on my monkey. He was bellowing something about how he used to perform at packed playhouses in Pittsburgh, and how he was once understudy for King Lear. He was still screaming and weeping as they took him -- and the monkey -- away to the humane society.

After the commotion I slipped into the store and managed to steal a copy from behind the "Police Line Do Not Cross" tape. Yeah, yeah, I have Tribes 2 now, but it's a hollow victory. Whenever I play, I can't tell if the enemy has our flag or not. I miss my monkey.

Could you do me a favor? Stand at this computer here, watch our base, and if you see someone try to take the flag, could you start squealing? No, no, like this: "OooOOOOohhhAAAAIIEEEEE!! AHH! AHH!" Yeah, yeah, that's it...

Why Doesn't This Warez Server Have Any Decent Customer Support!?

My Greatest Website Hack of All Time, and Everyone Thought It Was an April Fools Joke