Games That Have Only Limited Supplies of Ammo, but Let Me Quicksave, Might as Well Just Give Me Unlimited Ammo. 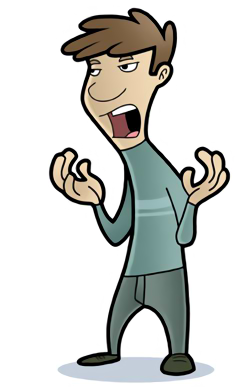 Hi, I'm Mike, and I'm still a saveaholic. Today I read on a website that a new game coming out will be "challenging" because ammo will be very limited. And yet, later in the same article, the developer said, "but it'll still play like a PC game, meaning you'll be able to save anywhere."

No no, I shoot a gun and then quick-load if I miss. I never use my rocket launcher because it'll waste my precious rocket ammo. No sir. Quick-save and Quick-load do the work of aiming for me.

I've never actually finished a game without a full compliment of rockets, healing potions, powerups, and a backpack full of every goody in the game. Now, people ask me, "Hey Mike, that's a waste. Why do you save all that stuff and it ends up unused?"

Well, I think the answer is obvious: Because I might need it later.

Quicksaving gives me the power of the Gods.

Dude, You Really Can't Complain about Player-killing When You Join a Diablo 2 Server Named 'Kill Kill PVP Mad Duelz I Will Own J00'