Woe, I Say, Woe upon Thee Who Trifle with the Devine Server Administrator! 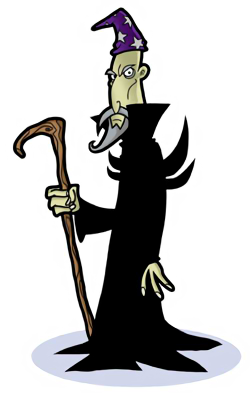 Step aside, process! My day of tribulations is far from over, but before we next speak righteous vengenace shall be mine and mine alone!

Let us begin at the beginning. I awoke refreshed from a full eight hours rest and immediately headed out to eat. I then spent twenty minutes in the drive-through of the McDonald's arguing with the reprobate on the other end of the speaker because she refused to serve me breakfast, simply because it was 3 PM.

McMuffinless and distraught, I arrived at work and stepped into my domicile, sheltered from sunlight and lit only by a single lava lamp and the warm refreshing glow of thousands of LED lights from our servers and routers. I call this place the Crucible of Enlightenment. It is here I weave my Arcane Arts of Unix Server Administration.

It is my Xanadu.

But my wrath still boiled within me, and before I could begin my daily cryptic shell scripting, I felt the need to restore the balance with a warm, refreshing game of chess on the Internet. My mind, like a steel trap, finds nourishment in the predictable and comforting patterns of the aged chess warriors of yore. I logged in and set up a game with an opponent I felt would assuredly assuage my pain of hashbrownlessness.

Soon, however, my egregious chess opponent began verbally abusing me! My blood began to boil. Darest he mock my Italian opening! Darest he cast doubt upon my flawless Evans' Gambit! ... Darest he call the black bishop his "...Little Popey Dude?"

Most certainly my opponent could've been no more than a small child, a precocious brat who, like a user over his account size limit, required immediate schooling. But in mine burning anger and haste, I threatened his precocious Queen and inadvertently exposed my rook, who fell victim to what he called his "horsey." I was livid with rage. I screamed audibly. I had been manhandled by a slavering prepubescent!

Burning with furious wrath, I picked up my chair and hurled it at my infernal machine. Glass shattered; sparks flew. Nearby the shelving unit perched precariously upon my desk tumbled; spilling burned CDs everywhere, it crashed into the server rack, cracking the plastic front like dried pasta. There was a flash; a rain of sparks. The entire rack crumpled upon itself like a house of cards, tossing expensive hardware carelessly into the ground. A multitude of green lights went very red, and then very very black. For the first time in years the comforting hum of mine minions slowed and ceased like the last rasping breaths of a dead man. Silence.

I had taken our entire coastal web server array offline.

Within moments my sniveling sweatshirted boss who does nothing but play Asheron's Call all day stormed into the Crucible of Enlightenment. "I've lost my net connection to the AC servers!" he cried, as would a whining child. Then he saw the devastation. "Good God what have you done!" he wailed.

I explained, as patiently as I could, that Unix servers rarely require rebooting but every year or so it's good to give them ... a hard boot. He was not amused. He pulled out his damnable organizational chart and droned contemptuously about his plan to remove all but a handful of functional employees so that he and others may play online RPGs all day. He then explained that he had slashed the server administration department to me and me alone because nobody else could decode my arcane scripting routines and backup procedures. He explained that we as a company could not sell off nearly enough EverQuest items on EBay to make up the cost of hiring additional consultants, and that if I didn't have the servers up and running within the next few hours his entire so-called "business plan" would fall apart. I wept no tears. The foolish and desperate wranglings of middle management were of little concern to me; I had lost my rook.

But then he explained that our mentally unbalanced technical support representative had recently overdosed on Vivarin, and that during the crisis I would be forced to handle the volume of support calls while he procured the required replacement hardware for me. LAMENTABLE! I was sat in front of a phone like a lowly acoustic coupler. I was horrified. Actual verbal contact with our sycophantic contemptible users? I wept inwardly and stared at the blinking extensions. I had descended into hell.

I answered call after call from the hamster-headed stepchildren of our backwards networked world.

"Help!" a lowly user begged. "Microsoft Word is unable to access my network documents!" I explained to the miscreant that she should be using VI for all her text editing needs, then hung up.

"My email is down! Microsoft Outlook can't find the server!" wept another sorry subhuman. I scoffed audibly. "Outlook? Bloatware! Use Pine. Or just type 'mail' at the % prompt, wretched villain!" Then I hung up.

Suddenly I received a call of paramount importance. I could scarcely believe my ears. "I was playing chess with some punk," whined a voice from the ether. "I took his castle dude and then everything went dead."

The audio connection between myself and my nemesis crackled quietly. The tension was tangible; I could feel it coalescing around me, tightening my very bones. My hairs stood on end. That scum. That freakish doctored tabloid photograph of a man. That worker of iniquity! WOE TO HIM! WOE TO HE WHO DAREST MOCK MINE CHESSMAKING CAPACITIES!

Restraining my bile I explained to him that I would be sending a "representative" to "help" with his "problem." I then wrote down with quavering hand his home address. Now the fool was MINE.

Forsaking a phone bank filled with blinking extensions, I crawled under my desk and slipped quietly out the back door. But not before grabbing my trusted wooden staff, The Educator, which I loving refer to as "Kill -9."

Oh yes my chess nemisis. Soon you will feel the stinging wrath of mine fury. Check, mate, match! You will be mine. Oh yes. You ... will be ... mine.

How Do I Win All My LAN Parties? I Credit the Sauce!