Night-shift Tech Support Is an Abyss of Pure, Screaming Horror 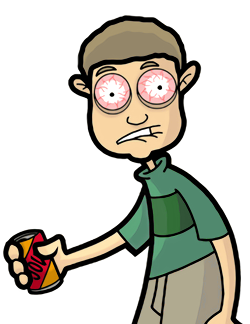 Hello this is CompuBuddy tech support hello could you describe the problem no wait first let me describe mine nobody believes me they never believe me they haven't listened to a word I said since September when I imagined the bats in the conference room late at night because I accidently grabbed a can of condensed air instead of my 8th can of Jolt Cola and burped myself into a hallucinogenic stupor during a particularly grueling shift during the one night when I worked at the coffee shop all day and tech support phones all night and hadn't slept for 64 hours just like tonight EXCEPT tonight is real I swear I was answering the phones and arguing with this woman who spilled Zima in her boyfriend's Counter-Strike server and I heard this thump and then there was SOMEONE GET THESE ANTS OFF OF ME! and I saw someone standing in our parking lot and he was waving a sword and complaining about his ping and prophesying the doom of the end of the armageddon or the world or something and I NEED SOME MORE SODA and I called up my boss on his cell phone and woke him up and he was mad and called me a Choad and said to lay off the caffeine and reminded me of the time I barricaded myself in the office supply closet and OH GOD MY EYES ARE MOVING INDEPENDENTLY OF ONE ANOTHER so I had another Jolt to calm down and then looked outside and saw he was in fact real and on the roof of our truck breaking windows and then he saw me and I ducked and I CAN NO LONGER FIND MY OTHER HAND smashing the glass and coming through into the building and the sword was over his head and I was running and all of my customers were on hold but how could I hope to explain and who could I turn to? MY HEART HAS CEASED BEATING WITH ANY DISCERNABLE RHYTHM and now he's tearing out the cables from the phone closet and quoting scripture I never heard of and there's no one here to help me but a phone full of angry callers and that woman we just hired in the server room who attacks anyone who comes near look at that I'VE GROWN AN EXTRA APPENDAGE CONTAINING A SINGLE ORIFICE THROUGH WHICH IT SPEAKS, HEARS, AND EATS if you are still there call the police the BUTTONS HAVE FLED THE PHONE and good God the man with the sword is heading toward the server room, AND NOW THE WOMAN IN THERE HAS GOT A DESK FAN WITH THE FINGER GUARD REMOVED SHE'S COMING RIGHT AT HIM Ohhh! Ohhh!!!

[Transcript ends abruptly with thud of techie hitting the floor, following the the gratting rattle of metal on metal and distant screams.]

*Blee-deee-beeeep!*
## We're sorry, you have reached a number that is discconnected or no longer in service. If you feel you have reached this recording in error, please check the number and try your call again. ##

This Crap Is Nothing like Fishing on My PC