You guys, I’m serious. This big E3 tradeshow is our best and only chance to buy Vivendi! 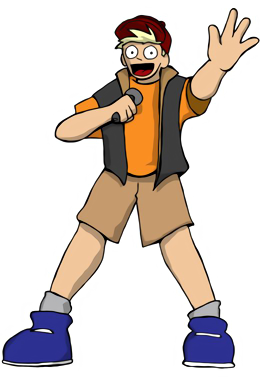 Okay everyone, huddle up, huddle up. It’s been months since I first announced our plan to buy Vivendi-Universal Games, one of the largest publishers on the planet. Since that time, we’ve sold some choice stuff on eBay, hocked my car, wagered phat lewt on a Dance Dance Revolution tournament, and all told we’ve raised $7200 dollars. Canadian dollars.

I’ll grant you, that’s a far cry short of the 1.1 billion Euros we need. But Vivendi still hasn’t sold, so we have one final chance. I’m talking about E3: The Electronic Entertainment Expo. It’s the hugest gaming show in the world, and it all goes down this week.

I’ve taken the liberty of investing every penny of the $7200 in buying equipment and securing contacts to create The Ultimate Gaming News Magazine. My thinking is, gamers will pay BIG bucks for a weekly gaming rag, you know, like Time or Newsweek but with pictures of Solid Snake on the cover. And none of this “Two month lead time” crap, either – our paper would be published every week, meaning the news and reviews are always current.

And forget the mealy-mouthed butt-sniffing those other magazines do for exclusives. I’ve hired on the most AGGRESSIVE reporters you can imagine, and not only will they kill to get inside info, they’ll post whatever’s on their mind. The REAL story behind gaming. I’m telling you, these guys are CRAZY. Our operations director always has a plan. Our special online correspondent practically lives online. Hell, our PS2 editor is a frickin’ Ninja! I also hired Tingle to cover our Nintendo stuff. Well, ‘hired’ isn’t so much the word. He works for free.

Anyways, due to the unfortunate shortage of gaming-related Internet domains, our magazine will be called “GameNostril.” That’s okay, it’s a good gimmick. The front cover says that we “dig deep for gaming news,” and I’m writing a column called “What’s Hot / What’s Snot.”

I’ll post updates from all of our key editors here this week so that you can see the progress of our amazing publishing endeavor. For our second issue, I plan to announce that we’re buying Vivendi-Universal Games. Oh yes. Here we come, Frenchies!

Here at GameNostril, we have a nose for exclusives. Get it? Get it? Because -- okay, look, YOU try to find an available domain, okay?

Aw man. Just look at you, dude. I knew I shouldn’t have given you that old copy of Harvest Moon.