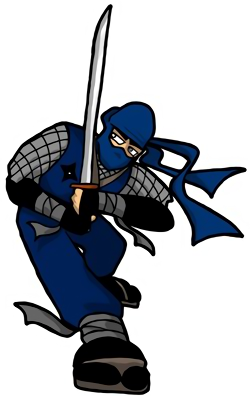 I crouched in the shrubbery, minding not to step in some doggie debris. My target was across the street, on the second story of a little white house on the corner, where a dimly flickering blue light illuminated the bedroom window. You may ask yourself, how did a licensed Pr355 N1nj4, who had infiltrated events from QuakeCon to E3, end up here in the quiet neighborhoods of suburban Chicago?

To find the answer, you have to look at the Asheron's Call 2 beta. This is the first real second-generation massively multiplayer online RPG, and it took me 16 or 17 assassinations before I got a hold of a working beta account to use to take screenshots for my fan site. Unfortunately, they allowed about 30,000 people to access the beta but there's only room for about 3000 on the actual servers right now. That means that even N1nj4s can get shut out if too many people are logged in. Fortunately, being a N1nj4, I have ways of making people log out.

I flattened myself low as a pickup truck rumbled by in a whoosh of hot summer air. Once the taillights receded, I lifted binoculars to my face and peered into the window. A young man sat hunched over the monitor, silhouetted against its glow. But it was clear by the contents of the screen that he was logged into the Asheron's Call 2 beta, using up one of those precious, precious slots. His fate was sealed.

Pr355 N1nj4s usually work alone, like assassin paparazzi. But this time I needed support on the home front. I pressed my radio receiver against my ear and spoke quietly into the microphone within my N1nj4 mask. "Target acquired, he's hot, repeat, this one is hot. I'm going in. Get ready to log into the game on my signal."

Hundreds of miles away, in a large dojo filled with web servers and a poster of mount Fuji, my assistant Hiro nodded his head. "Hai!"

I sprang across the street, my soft soles making nary a scrape against the still-warm asphalt. I slipped around the front porch, to the rear of the house near an above-ground swimming pool. Far from the street lights, I peered around at the yard, seeing only fireflies twinkling in the night -- all was silent. I made my move by clambering up the grape arbor and the making a leap to reach the gutters. They creaked as my weight hit them and I silently cursed at the noise.

Within a few moments I had slithered along the roof and then I lowered myself to his bedroom window. He appeared to suspect nothing; His back was turned, and he was intent only on his game. Like a cat I crouched on his window sill, then with an economy of movement I slowly withdrew my poison-tipped N1nj4 stars. They glistened as they whirled silently through the air -- but in a blur my target moved his head, and both stars slammed into his monitor with the crackle of glass.

Rolling out of his chair, my intended victim did a cartwheel to his bedroom door, righted himself, and flipped on the lights in a fluid motion. I found myself in a teenager's bedroom, the walls covered with posters for the Scooby Doo movie and a picture of Sarah Michelle Gellar as Buffy. Near the door a display of samurai swords hung on the wall, and he swung one out of its sheath to face me down. He must've seen my reflection in the monitor; this guy was a pro.

No matter, I've handled PR representatives from Microsoft -- no mere teenage beta-player was going to put me offline! As he moved to attack I threw my N1nj4 explosive smoke-bomb on the ground and then forward-flipped Mortal-Kombat style over his head. His Katana flicked through the empty smoke as I landed behind him and drew my own weapon.

"Your Kung-Fu is without the strength!" he said, turning slowly and leering. As he talked, his mouth moved out of sync.

"I will show you the Shaolin specialness with great fury!" I replied, speaking super-quickly for no apparent reason. I leapt forward, unleashing both a flying kick and a loud "wwwaaaa-taaah!" but my victim rolled aside and then turned to sweep my feet on landing.

Unphased, I sideways-somersaulted into the corner, but he was already on the attack, rushing me with his glinting blade cutting a white arc through the stale air of his bedroom. I planted a foot on each wall in the corner and walked straight up, pressing a hand against the ceiling and twisting myself to flip sideways over his head. I noticed briefly that he had a poster of Britney Spears above his bed -- I was fighting a desperate foe. His sword, meanwhile, drove deep into Buffy's gut and ripped out of the wall in a spray of plaster.

As I came down I leveled my sword to cleave his head in two, but he was already ready, crouching low and whirling about, sword above his head. Metal clashed onto metal in a shower of sparks. I paused to look at my crouching foe in the eyes for the first time. What happened next was a blur to all but experienced eyes: His Katana flicked low as I swung mine in a low arc, deflecting his blow, while at the same time my knee rose to strike his face. He reeled from the mighty blow, then fell backwards -- unconscious. Plaster from Buffy's wounds dribbled onto his head.

I didn't kill him: for a foe like that, it's far worse to live in dishonor than to die in glory.

I stalked over to his PC and logged him out of the game. "Hiro! Now! Log in!!" I hissed into my microphone.

"Hai!" Hiro shouted back. "Entering password! Clicking through message of the day screens! Now I am skipping the intro logo screens. I am looking at the loading screen. Here we go ... It is loading up ... it is logging in ... and ... NO! We're too late! The game server is already full again!"

I cursed audibly. "Dishonor! Okay. We'll try again. Who's next on the list?"

I sheathed my katana, clicked off the lights, and disappeared into the night after my next victim...

Before I left I drew a moustache on his Britney poster.

My new cable modem has taught me universal truths that I didn't want to know.