My Secret N1NJ4 Mission to E3 Was a Dismal Failure 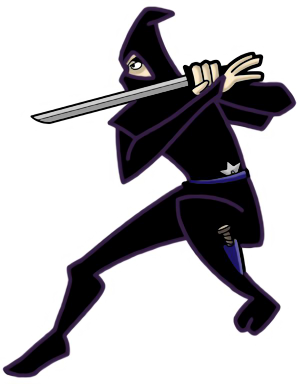 My name is Alexi Federov, and I am a PR355 N1NJ4. You may remember my stealthy exploits during GameStock, and my exclusive photo of what the X-box plastic shrink-wrapping would look like -- posted on my fansite and mine alone! Now, of course, over the past few months every single gaming site I've worked for has gone out of business, and nobody was available to pay for my press pass to E3 (the biggest gaming convention in the world.) But the coverage, as we PR355 N1NJ4s say, must go on -- no matter what the cost in human lives.

Sadly, all did not go well. Allow me to paint the scene.

Under the cover of the pre-dawn stillness of night, the Goodyear blimp rumbled quietly over the sleeping city of Los Angeles. Few saw the spectacle, the dark oblong shape against the purple night sky, returning home after another long journey. Fewer still, perhaps none at all, saw the small speck of a figure bunjee-jumping from his hiding place underneath the gondola where he'd been fastened ever since grappling to it the evening before. That speck was me. A PR355 N1NJ4 never sleeps.

I plummeted, arms outstretched, over two thousand feet. The cord pulled taught, and I withdrew my mini-crossbow/grappling hook from my black tunic. The steel cord whistled through the air and scored a hit onto the roof of the Los Angeles Convention Center, the site for my mission and the largest gathering of gaming industry professionals ever. I reeled myself down; I released the bunjee cord from my feet. I did a handstand. I flipped head-over-heel over the aluminum roof, quiet as a sampering gerbil. Within seconds I had planted myself before a steel ventilation grate at the top of the West hall elevator shaft. Moments later I was within the compound.

I was but a trace of a glimpse of a shadow from the corner of the eye; I was all but invisible. I flowed through rafters above the pre-dawn show floor like a Spring breeze.

So it was that I found myself suspended between two girders high above the show floor as the unwitting sheep filed into the convention center hours later. They all had passes. They all waited for permission to enter. They were all fewls; and I was like lightning, poised to strike and set all aflame with my electrical touch before disappearing in a blinding flash. My plan? Zip down by ripcord into the back-room Star Wars Galaxies private demo. There, I planned to snap an ILLICIT AND COMPLETELY UNAUTHORIZED PHOTO OF THE JABBA THE HUTT MODEL IN-GAME!! Immediately after snapping the digital pic I would throw a smoke bomb on the ground, and cackling with sadistic glee, I would disappear through the mist as the publishers screamed and wailed in frantic terror. Moments later I would be riding out of the South Hall Parking Garage clenched invisibly to the top of a shuttle bus.

However, as I clambered around high above the West hall, it became apparent that my surveilance info was incorrect. I could not locate the LucasArts area from my vantage point. I decided to rapell down and steal an updated show program from the back-pocket of an unsupecting Activision employee. Silent as a falling leaf, I descended into their area. However, just as I was about to capture my prize and disappear, I spotted professional skateboarding champion Rodney Mullen talking to some reporters by the Tony Hawk pavillion.

I cannot recollect, exactly, how it happened. But ... I just lost it. I simply lost it. Years of PR355 N1NJ4 training evaporated instantaneously. I suddenly found myself rendered into a complete fanboy. "DDUUUDDEE!" I said, jumping to the floor and rushing toward him as dozens of unsuspecting booth security admins suddenly stirred in shock and turned my way.

"DUDE! Rodney Mullen! I play as you in Tony Hawk Pro Skater all the time, man! I tell all my friends you're the best skater in the game! Dude you totally rock!" Rodney turned to me, and I suddenly froze in terror. I was standing in the open, in a bright light, completely exposed for all to see. I had no press pass. Security descended on me like pit-bulls. When I realized what I had done, I had no choice...

I started shouting advice to Rodney as they dragged me away. "Hey man press 'Down+Right+Grab' it's PHAAAAT!" I screamed. Within minutes I was out of the building and in a holding cell being eyed by the Los Angeles police.

Granted, no mere prison can hold a fully trained PR355 N1NJ4. Sixteen casualties and one man without pants later, I was again a free man. But I dared not return to E3. My mission was a failure ...

Or was it? Perhaps Rodney will heed my advice in the professional circuit ... hmmm...

Next year, Jabba. Next you -- you will be mine.

I Am Tired of the Media Portraying Those of Us Who Dress Freakish and Wierd as Freaks and Weirdos.