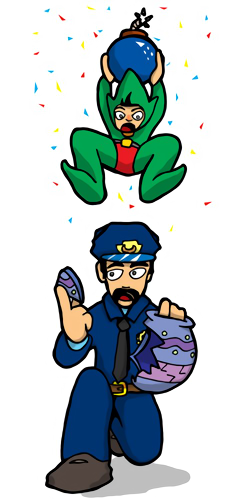 I don’t think we ever fully appreciated my friend Steve, who wanted little more from life than to play as Tingle with the Game Boy Advance while I played my way through Zelda. The confetti, the gibberish he’d scream, the time he jumped up on my head during a boss fight – sure, it was annoying at the time. But I never doubted his loyalty.

So after our falling out, when he started to go crazy until the cops were after him, I felt a twinge of responsibility. He may have been a terrible Tingle, but he was my Tingle.

That’s why this weekend I found myself, covered in brambles from the nearby forest, crawling into a Pottery Barn store hollering out his name. We must’ve smashed every pot there, but no Tingle. All we found was a guy slinking through the shadows with a tie on his head. He froze solid as my flashlight beam fell on him. “Can you see... I’m busy?” he hissed. Then he hid under a cardboard box until I lost interest.

Convinced that Tingle was nowhere near the building despite all the pots, we made our way toward the front door. In horror, we dropped down to the ground; through the front windows we saw a dizzying array of flashing police lights as two or three cruisers squealed up to the building. Doors opened; flashlights pierced the darkness. Radios whistled and hissed. The place had more cops than the last ten minutes of the Blues Brothers movie.

“The back door! The back door!” I whispered, urgently. We ran in a crouched position, Rainbow Six style, between row after row of broken shelves. Silently we crept through the kiln room, but no sooner did we spot the exit than it was kicked open by a skinny rent-a-cop with a mustache.

“Yinz all best be freezin’, because we would have this whole place whatcha call ‘surrounded,’” he said. He bent his back and rested a hand menacingly on his walkie-talkie. “Don’t make me use this,” he uttered.

Then his flashlight beam fell right on us. “Ah-HAH!” he bellowed. We were doomed.

But from out of the shadows – a green blur. “LOOOOMM-PAH!” a squeaky voice cried out. The cop’s flashlight whirled around to see, amidst a hail of confetti, a man in a Tingle suit swinging from a makeshift grappling hook wielding a big black sparkling bomb. The cop screamed – precisely the way a little girl would scream – and dropped his flashlight. That’s when we made a break for it – me and my friends at least, pushing past him out the back door. Tingle stayed behind, long enough to drop to the floor, put the bomb down, and fasten the grapple to the belt loop of the cop. As the man in blue fumbled for his walkie-talkie, Tingle heaved the rope, and sent him up to the ceiling where he tied him off to let him dangle.

The police from the front of the store burst into the kiln room and trained their flashlights on Tingle (all except for the stray beam or two that illuminated the rent-a-cop attached to the ceiling.) “Don’t make a move!” they demanded. But Tingle threw a handful of confetti in the air and yelled “Faa-LLOOPP!” At that precise instant his ‘bomb’ exploded, spewing a thick cloud of gray smoke into the room. And then Tingle was GONE.

It’s okay man – we forgive you, Tingle. I take back everything I said. You’re the best Tingle on the planet. I mean that.

I keep trying to get a hold of Steve – I mean, Tingle – with my Game Boy Advance, but he never answers. It’s hard to get through Zelda without him. Tingle, you’re welcome back anytime. Anytime, man.

In order to find a Tingle, you need to start THINKING like a Tingle.

Dance Dance Story Part I: An Important Message from the Minstrel of Ph4t B33tz