It was a Battlefield game that will live in infamy. If, by infamy, you mean easily forgotten weakness. 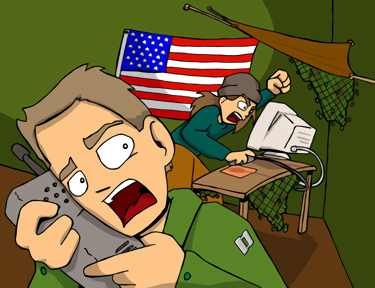 The day of the big tournament came, the first in my career as a professional Battlefield 1942 player. The tension in the mall was tangible. Even the guy behind the Whattapretzel counter was ... nearly awake. It was hard to tell.

Myself? I was ready to go. I was on fire. My crew was strung as tight as a violin. They were the kind of troops to win Medals of Honor, usually posthumously.

“Soldiers, sailors, and airmen! You are about to embark upon the great crusade toward which we have striven these many months. The eyes of those chicks by the Piercing Pagoda are upon you!" I said, standing before and American flag.

Over the next two hours, we won every match we played -- we raged undefeated all the way to the finals. And that’s when we encountered our nemeseses -- er, nemisii -- er -- nem -- our arch enemies. So far as I could tell nobody on the other team had any names or individual identity. Our final opponent was just a group of eight Japanese kids in white tee-shirts with identical rising-sun Bandanas partially covering their eyes. They were serious: during the semi-finals the tournament announcer had to step in and stop a guy from committing hara-kiri when he accidentally bombed a teammate.

We drew straws and got the Wake Island map, American team. Our best map! But when the fighting began, it was clear that we were in for a knock-down drag-out. No sooner were we celebrating the sinking of the Japanese carrier when the north outpost had fallen to their troops. And then the nearby town. They roared toward the airfield with a tank and a fully-stacked troop transport, but we fought them off by smuggling a Pirate with a bazooka behind a shrubbery. Crenshaw led the counter-attack from his tank, and for a time we held the town North of the airfield, but then it fell to another rush. Ten minutes into the battle we were ten tickets behind in a nearly dead-even stalemate ... and then they took over the airfield.

GENTLEMEN, IT’S TIME FOR THE HORRIFYING HUMAN WAVE ATTACK.
Just because something never works doesn’t mean it’s not a legitimate wartime strategy. I announced “HUMAN WAAaaaAAVE!” and the charge began. At first, the Japanese didn’t know what hit them. All eight of us rushed the airbase, knives out or machine guns blazing. After the initial shock, then came the laughter. Our tickets began counting down faster than the DOW Jones. I myself lunged over a pile of bodies and made it almost past the first sandbag bunker before I was machine-gunned down by a tank sitting at the ammo dump. “I think we’re making an impression!” I cried.

Ten minutes later we only had a handful of tickets left. “Stop! STOP!” cried out our captain. “Regroup!”

“Oh sure, we’re down to eight tickets,” I said. “But their morale is shaken. They know we’re serious. I think they’re about to break.”

Nonetheless, doom and gloom was the mood of the moment. The other team still had 180 tickets. The only way to win now was to take over the entire island. As everyone hung their heads in anticipation of grim defeat, the great gray bulk of a Japanese destroyer drifted beside our shore. To our surprise, Crenshaw peeked his head out of the door to the bridge. “Stole it,” he explained. “Let’s roll.”

AT LAST BOYS! TO THE SEA! NOW WE HAVE WHAT IS KNOWN, IN NAVAL TERMS, AS A REALLY BIG GUN.
I vaulted into the water and swam up the side of the destroyer. This! This was the kind of Naval Action I was made for! I love the way the deck of an ol’ girl like this reels under the kickback of the 16-inch guns. Crenshaw and I spotted the enemy coming down the hill toward the last town -- they were all grouped together! They thought it was a turkey shoot! “GIVE EM HELL, CREANSHAW!” I cried, and together we cut loose with every turret we had.

The peninsula exploded into a white-hot ball of fury, an arc of sand and debris rushing out from the impact crater. Bodies flew. The remains of their tank twirled in the air and crashed back to the earth, engulfed in flames. The fight was on!

“Easy men!” our Captain cried. “There’s one ticket left for each of us. DON’T GET KILLED.” We took it nice and slow. Crenshaw and I steamed up the coast, hitting the ground in front of our troops with shell after shell. They crept forward, securing a couple of tanks, pounding the enemy cautiously from a distance. It was a slow advance, but it was working.

Within a few minutes the airfield was ours, but not before Kevin fell to a sniper bullet. As we moved into the North village our engineer perished in the flaming belly of his tank, but the advance continued. Suddenly, the deck of my destroyer shuddered. The Japanese were getting it together and manning the shore batteries. Black smoke poured from the hatches. “Help me fix the damage!” I cried, rushing out onto the deck with a wrench in hand.

“I gotta go take care of something,” Crenshaw answered, diving into the water.

“Come back! Get back here!” I howled, but it was no good. A few moments later a message on my screen told me that Crenshaw was dead. Then another shell from the shore pounded into the bow of our ship, and the explosion threw me against a turret. Alarms clanged around me. “Go on without me!” I called to the shore. A captain, you know, he always goes down with his ship. I saluted as the cold, cold waves crept over my chest and finally swallowed me whole.

We had only two lives left.

I BET REAL WARS DON’T END THIS WAY.
I watched the Destroyer slip under the waves and turned to my Captain for orders. “If we take that last flag,” he said, “They won’t have any place to respawn. Even though you and I are the last people on the team, their tickets will count down instantly to zero and we’ll win. We’ve got to take that flag without dying!

The two of us poked our heads up over the sandbags and fired off our machine guns. One, two, three enemy soldiers fell but I took a bullet to the arm. “I’m hit!” I cried.

The Captain didn’t stop to give advice. He saw an opportunity and lunged for it! He vaulted over the sandbags and darted across the courtyard to the first shack. I frantically reloaded while he tossed a grenade into the window. A Japanese solider bought it. I stepped around the bunker and ripped a clip into the window of an adjacent building while the Captain rushed forward. Another enemy soldier fell! We were doing it!

“Now!” the Captain hollered, and I rushed forward. He made it to the flag and then grabbed his chest as the crack of a sniper rifle filled the air. “I’m -- hit!” he gasped. I dove to the dirt as my Captain fell, but not before the flag changed to neutral grey.

By this time, most of the team had gathered around my monitor. If I died, the game was over. But if I could hold that flag for just a few more seconds, we’d own the whole island and the map would be won! I sprang to my feet and threw myself against the corner of a shack just as another sniper shot rang out. Hands shaking, I reloaded my weapon. “C’mon, you can do it!” my teammates shouted. Even the girls at the Piercing Pagoda were getting into it.

I dashed around the back of the building and then dove to the open ground near the flag. The enemy sniper -- there! On the hill! I fired a burst of bullets, and then another. The dust cleared ... he was dead! The map was mine!

I stood up and limped to the flag. Soon it would change to the stars and stripes. Victory was only moments away! Only moments!

Then, around my feet, I saw the must curious thing. It looked like a shadow, a small but growing shadow. It was as though something were falling from above. All around me my team grunted in confusion. What was it? I looked up.

And a Jeep fell on my head, crushing me.

“Crenshaw you dropped a Jeep on my head!” I howled. you promised to stop running me over with a Jeep!”

“I don’t think you appreciate just how much effort it took to make that happen,” he replied.

The match was over -- we’d lost. Our opponents danced on the tables and howled with joy. In one corner, I saw a beefy little man weeping, something about a wedding ring. “I’m half the woman I once was!” he sobbed.

Crenshaw has a pretty warped idea of patriotism.

I guess it's not too late to beg for my real job back. Maybe those Japanese kids will hire me? Uh ... "Konnichiwa, uh ... dudes-san!"

Who ever told you that trying to seduce a gamer was easy?

Moving to Tokyo in order to be the first to play Soul Calibur II has its downsides.