This invasion is unlike any invasion I've ever slacked onto before. 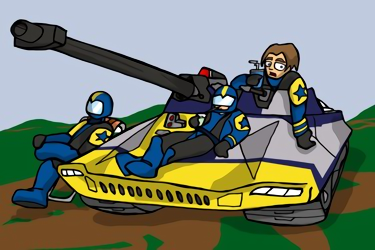 What time is it? 2 AM? Wow, I've been "attacking" this base for ... how many hours now ... one, two, seven ... FOUR DAYS. As a PlanetSide Combat Support Slacker who has perfected his technique, I've gotten to Battle Rank 12 without firing a single shot. But never in all my weeks of inexperience have I seen a battle such as this!

My squad, an entire unit of Support Slackers, gradually moved cautiously into this area days ago hoping to leech off of some experience. To that end, we surrounded this enemy base hoping to jump in as soon as the combat started and gain some easy XP.

Little did I know what we were up against. The team holed up inside that base ... they were locked down, tight. They were immobile. They never emerged. We KNEW they were in there. We knew because occasionally someone adventurous soul from our faction who wasn't a slacker like us would approach the base, and we support slackers would all slowly close in behind him lending him confidence. But the moment he disappeared within the maw of that base, we heard the thunderous clamor of a dozen sentry turrets and untold number of MAX heavy armor suits wailing away with machine guns. Over the voice channel, we could hear the weeping screams of a once strong man being cut down into shapeless mounds of steaming innards... and then silence. Afterwards, the group of us support slackers slowly backed away from the base, like a receding hairline falling back from a bald spot.

I'VE BEEN DEFENDING THE CHUKU BIO LABORATORY SINCE THE ALPHA TEST!
I was confused and frightened by PlanetSide, because there are no flags to guard. Lost and dejected, I stumbled here, into the Chuku Bio Laboratory, and decided that I would start defending it no matter what the cost. Do you hear me? No matter what the cost.

I set up a triple-redundant network of automated turrets aimed at every entrance, every room, and every corridor of this building. A fly can't take a dump in this building without it getting shot out from under him. The war raged back and forth, but Chuku remained mine and mine alone.

Then my disciples came. "How long have you been camping here?" they asked. "I've been defending this base since the FIRST time Disco was cool!" I shouted back. When campers meet their master, they know what to do. They camp along side. They started joining my squad. Now I've got a whole outfit of campers. There's forty of us in here at any given time of the day. Several of us haven't left the base or seen daylight since the beta test.

I couldn't even remember what the outside LOOKED like. So this morning I popped open the door to the roof and peered outside. Just at the horizon I saw a dozen enemy tanks, 30 ATVs, a half dozen advance mobile stations, an army of infantry, and a flock of aircraft overhead. They circled around, but none of them ventured closer. I wasn't scared.

"THIS IS MY HOUSE!" I screamed out the door. "I've been defending this base since Bob Villa was still on PBS!" I closed the doors with a crashing slam, then ordered my people to double-up on the turrets.

SO, SHE THINKS SHE CAN CAMP OUT THE SLACKMASTER? WELL SHE'S WRONG! I DIDN'T GET TO BATTLE RANK 12 BY ATTACKING BASES, AND I'M NOT ABOUT TO START NOW!
This is like that story about an unstoppable force meeting an immovable object. Except that it's more like a lackadaisical object hanging around an unmoving force. Well, if that's the way she wants it, THAT's the way it's gonna go down!

[The leader of the Combat Slackers adjusts the backrest of his computer chair, then reaches over and withdraws a martini shaker from a cooler. He shakes a drink, then carefully pours it into a martini glass. Delicately, he stabs a pair of olives and dips them into the drink.]

I thought that taking over Chuku was gonna be a run-of-the-mill textbook slack. But I can see that today, June 6, 2003, will mark the largest ever amphibious slack in the history of warfare. You can't out-slack us, pretty camper woman. One day, your reign of passive aggression will end! Someday someone will destroy you and send that whole base crashing around your heads. And when that happens, I'll be there! Nearby. Probably behind a wall. Getting the experience from his or her hard work.

[The Slacker takes a long slow sip of his martini, then leans way back in his chair and tips his hat over his eyes.]

[The support slacker kicks off his shoes. With one outstretched toe, he clicks the "play" button of a grungy old tape recorder. Jimmy Buffet starts playing through the tinny speaker. Overhead, a ceiling fans lazily circles...]

What is this? You guys call THIS a game trailer? Step aside and let me show you how to edit.

My interview at the movie theater went downhill fast when they started talking strategy.