Many readers simply don't understand what qualifies a game for the "Tingle Awards." 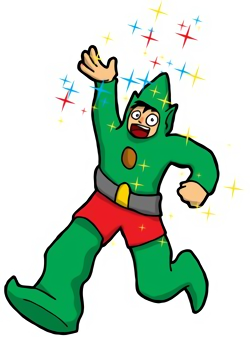 Yes, this week, GameNostril is publishing its First Annual TINGLE AWARDS! Awarded be me! Tingle! Fwooopa!

Many people say that they don't understand the rationale behind the Tingle Awards. They would rather have BORING awards, looking at graphics and gameplay, like GameSpy's E3 Awards. But not at GameNostril! GameNostril is the only publication to award games strictly on a scale of foopyness!

Here's how nominees are selected. All last week, I -- Tingle the mighty! -- buzzed around the show floor on a motorized scooter with an air horn. When I saw a game that I liked, I threw confetti in the face of the producer! Those that didn't cry, howl out in horror, or reach for a SARS mask were considered nominees! Then I would run from the authorities.

But now that the serious part of our awards show is out of the way, I'd like to editorialize. Why is the U.S. Army so uptight? The gang from Sony didn't complain when I honked my horn and threw giant black bombs into their booth! Well, at least, they didn't start shooting at me. Loompah!

Winners of the Tingle Award recieve a ceramic pot! It is filled with JUICE! It shatters if you so much as tap it! And when it does, I throw confetti in your face and yell "FWoo-zooiing!" It feels good to be a WINNER.

We've got a lock on "The One." He's running through the post office level banging on the "x" button repeatedly.