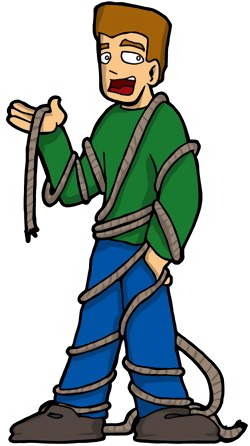 Wow, look at that! What's that you're demoing here at the trade show? True Fantasy Live Online for the Xbox? Yeah, yeah that looks awesome! I really gotta hand it to you. That looks incredible.

But, speaking as the online editor for the prestigious GameNostril publication, I'd like to make a few suggestions.

I once spent over three months tied up on the floor of my apartment with no communication to the outside world except via my SOCOM: Navy Seals headset. What I want to know is, what precautions have you taken in case, you know, someone is playing your game and suddenly gets trapped under a bookcase? Or, they've just woken up in a bathtub full of ice with their kidneys missing? How will they call the local authorities?

I'm not saying you make it the "x" button or anything, but definitely some sort menu option under the 'Start' button or something. No? What about some sort of "HELP I'M HANDCUFFED TO A STAIRWAY" macro? You know, something players could enter into the game using just their nose or teeth.

Have you given serious consideration to how people would play your game while ball-gagged?

Okay, okay, fine. I understand. But you guys are just ASKING for a bad review. Or maybe some kind of lawsuit. Oh, these? These are just ropes. You know. For old time's sake. What's this? COPS? Get your hands off of me! Hey, where were you guys when I needed you, hunh!?

Hey, one last question. You guys don't have any smoke bombs in this game, do you? You know, the kind people would put onto my head when my character can't move? No? Good ... gooooood.

Many readers simply don't understand what qualifies a game for the "Tingle Awards."