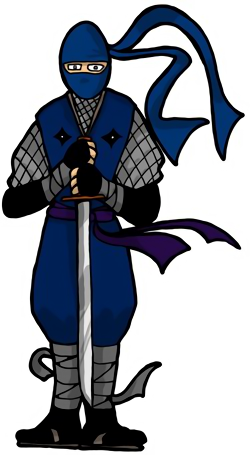 As a fully trained and certified Pr355 N1nj4, I refuse to accept that the Max Payne 2 showing is for International Press only.

Which is why I was forced to throw that unsuspecting man from the building. One moment, he was patrolling the Concourse above the main expo floor, walkie-talkie in hand. The next? He was whirling through the air like a ragdoll physics demo. He was in my way, standing between me and the closed-door Max Payne 2 demo.

We Pr355 N1nj4as have a policy not to accept closed doors.

Moments later I was grasping my filament wire, slowly weeding my way through the rafters a couple hundred feet above the show floor proper. Oh, sure -- they remembered to close the doors to the Max Payne 2 showing. But the roof? Wide open. The Pr355 N1nj4 strikes!

I shot out another grapple, when suddenly with a jerk and a snap my rigging gave way. I plummeted in plain view! Before hundreds of eyes I fell, righting myself cat-like in midair to land on my feet.

I found myself on a raised platform, standing on a blue mat. There were ropes on all four sides, and in two of the corners stood tattooed men in shorts with wrapped fists. Just then, a bell rang.

I had landed in the middle of the K-1 World Grand Prix Ultimate Fighting Championship booth, surrounded by the greatest fighters of this generation.

One rushed at me and I leveled him with a devastating kick to the knee. His sparring partner stalked cautiously my way, then threw a calculated punch at my head. Like a reed in the wind, I twisted before the blow, snapping my arm forward to grasp his in mid air. A quick flick of my wrist, and his arm shattered with an audible crack.

Seeing this display of fortitude, the other world champions poured over the ropes and flooded into the ring. "What are you doing!?" cried their coach, a bearded Asian man with weathered crow's feet. "FOOLS! Encircle him, and attack him one at a time!"

A heavyset brute rushed at me, head bowed. I quickly dispatched of him with a sidestep and chop to the neck. Then came the man with the metal folding chair; I flipped him overhead, took the chair into my own hands, and unfolded it with a sudden movement that whacked his skull like a bat hitting a melon. I used the legs of the chair to fight off another man with a knife, then pinned him to the floor with in while I flipped over the backrest to level a flying kick at another champion's head.

Ten minutes later, the bell rang again. But this time I stood alone, astride a pile of moaning victims. A microphone descended from the ceiling, and I seized it and howled into it over the roar of the crowd.

"MAX PAYNE! I'M COMING FOR YOU, PAYNE!" I boomed. Across the aisle, I saw the Max Payne PR team furiously packing up their things and rushing for the exits, defended by America's Army rangers with guns. "YOU CAN RUN BUT YOU CAN'T HIDE! YOU'RE NEXT, PAYNE! YOU HEAR ME? YOU'RE NEXT!"

My honor demands it.

"No no, that's allright. I don't want to lend my identity to an extreme pro skating game. I prefer to lurk in the shadows. And kill. Pardon me, pardon me..."