This Week's Winner: the Discovery of an Enemy Flag Base Has Destroyed the Shallow Cocoon That Was Once My Life 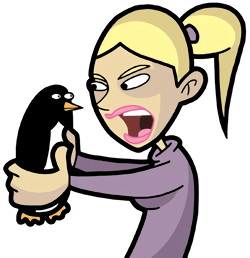 Yes, for the first time in over two years, I am NOT defending our base. You sorry weasels will have to go it alone. No longer will invaders be vaporized the moment they accidently make the splashing sound at the water entrance. No longer will potential flag-thieves be decapitated the moment they get past our stairs, while I, in a single sweeping motion, leap to the floor and grapple back up to the ceiling --depositing our flag on the way.

My fall from glory happened early one morning last week, while I was on a roll of 46 consecutive flag defends in a row. Suddenly I felt a tug at my shoulder, and turned to discover some -- spastic kid -- I don't know, I think he's actually a student here, but he's half my age, and speaks quickly like a machine gun. So he says, "Want to come back to my room so I can strap you to a table and overclock you like I am overclocked so you can see the world through my eyes and revel in the improved performace and framerate?"

Holy crap. I fear no man, particularly those who wish to deprive me of my flag, but here I actually screamed aloud. Can you blame me for being a bit disoriented? Meanwhile, someone came into my precious base with a rocket launcher and painted me all over the walls. In a daze, I respawned, and instead of rushing immediately to my base I must have walked in the wrong direction.

I realized, in stunned silent terror, that the people trying to take our flag were just like us! What right did I have to stop them? What makes them so wrong and us so right? What if I had been born a different color -- would I be defending their flag? Would that make me any less of a person? As I pondered these things, I accidently stepped in the water and made a splashing sound at the back of the base. Without even flinching, one of their defenders instantly blew me away with a rocket -- and yet, just before I gibbed, I looked into her eyes and saw that they were just like my own.

GOTDAMMIT you stupid Penguin! Do you hear what I'm saying!? How can I in good conscious continue defending our flag with reckless, genocidal abandonment!? Just because they are born under a different flag, does that mean I should gib them? Does it? ANSWER ME!

And another thing. If I so much as see that overclocking twerp again, I'm going to clobber him.

While you guys are voting, could you do me and the chump here a favor? Go over to the overclocking kid and vote his ass down a few pegs. Keep in mind that I can crush you with a grappling hook and a shotgun.

The Marketing of New Catch Phrases Is a Serious, Difficult Business

Mario Is Teaching My Son to Flash the Wrong Gang Symbols