The Artist and the Madman

Fargo: I'm speaking today with The Internet's HotSoup, the new illustrator for GameSpy's Daily Victim feature. I thought it'd be fun to sit down with the newest part of the GameSpy Network and have a little "chat."

[Fargo pulls out a pair of jumper cables and clacks them menacingly.]

The Internet's HotSoup: They won't work this time -- I'm grounded. 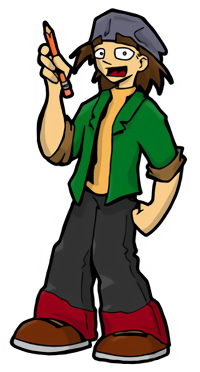 Fargo: Okay, fine. On to the questions, then! The Daily Victim was running for a year with a different artist -- Gabe from Penny-Arcade -- doing the illustrations. When the search for a new artist began, what inspired you to enter?

HotSoup: One of my Lethal Doses readers sent me an email saying the Victim needed a new artist. I've always enjoyed the Victim. I've been reading GameSpy and the Planet sites since I was off at college, and I'm also a diehard Penny-Arcade reader. So when Gabe started drawing the Victim, I had to check it out. And, when you needed a new artist... well, I assume the flowers and the singing telegram expressed my enthusiasm.

Fargo: Actually, it was the prostitute that did it.

HotSoup: What? She told me she was just gonna sing!

Fargo: Are the tight leather pants you're contractually obligated to wear in any way uncomfortable?

HotSoup: They're starting to pinch... are you sure there isn't any sort of no-pants clause?

Fargo: Yes, Virginia, there is a no-pants clause. Er, I've always wanted to say that. Christmas was a very special time at my house. About how long does it take to put together a Daily Victim?

HotSoup: Eh, probably about a half hour to draw, give 'r take, and fifteen - twenty minutes of post-production.

Fargo: What exactly is "post-production?"

HotSoup: Vaccuuming up the hairs.

Fargo: Do you sketch things on pen and paper first? Or do you do it all digitally?

HotSoup: Who knows. I'm crazy. I might draw it all in ink, or I might pencil before hand... I usually scan it once I'm happy, then use the tablet to touch it up. Which is rare, because I'm a master, as we've already discussed.

HotSoup: Probably Cowboy Bebop. But I'd say my favorite overall is Kodomo no Omocha. If you haven't seen it, you're missing out.

Fargo: Kodomo no Omocha? That's the sex with Pandas one! I don't mean to brag, but that's sorta based off of me, you know.

Fargo: No, oh, uhm, THAT's what I mean! That was me. I went to elementary school once. As a ... Japanese girl.

HotSoup: Were you an actress?

Fargo: A very good one, apparently. Do you "ink" things on paper or in the computer? What do you use to color your drawings?

HotSoup: I ink on paper, because I like using pens. However, all the coloring I do is through the computer. Various applications and techniques. I've learned a bunch of tricks for coloring digital images. I should hope to pass that knowledge on someday.

Fargo: Your claim to fame is the Lethal Doses comic strip. Tell me about that, but to make things interesting, you're not allowed to use the word "the."

HotSoup: Teh best thing about teh Lethal Doses is teh characters. It took about a year to get teh rythym down, but now teh fans seem to like it. It's teh best.

Fargo: Ha ha! I get it, you spelled "rhythm" wrong. You also draw for an online comic called Winter. The art style is different than the others. Tell us about it.

HotSoup: You got an Internet full of gamer comics and funny comics, but very few serious stories. At least, none in the limelight. So to test my art, and the writing skills of some friends, we put together a post-apocalyptic drama. It's a lot of fun, and derives most of its feel from modern sci-fi stories and mangas. Check it!

Fargo: What do you do in "real life?" Or do you draw all the time?

HotSoup: Hella lotta stuff. I teach karate on the weekends with my mother (Isshin-ryu), I also dig rock climbing, playing bass guitar (and the harmonica), and of course, play video games all the time.

Fargo: You teach karate? Wax on wax off? No way!

Fargo: That's amazing, because I'm a master of the defensive art known as Hiroto poo -- loosely translated, it means "Iron Bowels." Some guy taught it to me once on the subway.

HotSoup: I don't think I've ever heard of that one, although I can recommend some dietary supplements.

Fargo: Kick me in the balls!

HotSoup: Let me think about it. No.

Fargo: C'mon! I've been doing the exercises every day. Kick me in the balls! Go, full on. Hi-yah! This will be great publicity for the strip.

Fargo: Then what good is it? C'mon, are you afraid of my nards? Are my boys intimidating you? Bring it!

HotSoup: You know, since we just started working together, I don't think it's appropriate to --

[Check out the Daily Victim on GameSpy.com!]

[PlanetFargo is posted every Friday at GameSpy.com. Read the archives! Fargo is an online community gaming journalist who had to repeat the sixth grade because he didn't know how to speak Japanese. Mail Fargo!

Get Fargo in your Mailbox every day -- Subscribe to the HTML version of GameSpy's Daily Newsletter.