'Kay Dad, I Understand the New Puppy Chewed up Your Gel Mouse Wrist-rest, I'm Just Saying There May Be a Logical Explanation 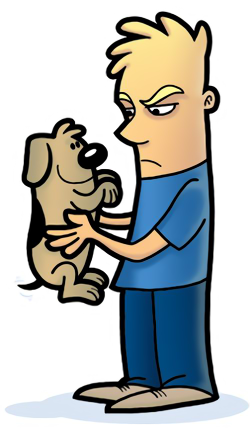 Look, so yeah, so he came into your bedroom this morning dragging the remnants of your computer wrist rest, causing you to cancel your golf game and sending us all to the veterinarian to figure out what this gelatinous ooze was coming from his mouth. But c'mon dad, he's Sarge, he's not just a Christmas puppy, he's a born and bred fighting machine.

Allow me to construct for you an alternate scenario. Bear with me here. It's 4 AM, and silhouetted in the moonlight four shady figures race silently across our rooftop. That's right dad, I'm talking about ninjas. I've done a lot of research on ninjas, and you know despite what they're saying in Washington, I think they're a real threat.

But Sarge here, see, I've been training him since day one to be a master of base defense. His keen sense of puppy-hearing was aware, while you quietly slept, of a ninja attempt to take the family flag.

So picture this -- there's Sarge, stepping into your darkened study, ready to throw down his life for the family. And at the windows he sees them, ninjas, eyes glittering in the moonlight, weapons poised and glinting. Now he knows, he's outnumbered! For the love of God, dad, he's just a puppy! But he didn't back down from Joey's Psychopathic Dad, and he wasn't gonna turn tail here. No way!

So desperately he straps your gel mousepad wrist-rest around his back, and as soon as one of those ninjas quietly opened the window, he leapt for the jugular. One down! Only now there's no element of surprise, right? But Sarge has that under control too, see, he throws down the lamp to the floor with a dull crash. Now, there's broken glass everywhere, disabling the ninja rushing him, so Sarge can claw at his hooded eyes. Two ninjas down, but then things get sweaty.

The third ninja dives under the couch, right? He's gonna attack Sarge with blow darts. Quad poisoned blow darts. Because that's what they do. They're ninjas. So Sarge, he's got no choice, he's got to get up on the couch where it's safe, and he claws through the cushions, disabling the ninja from above. Just like I taught him. Three down, but the last one, knowing he's beat, isn't about to play fair -- he throws shuriken. Those are throwing stars, dad, I've seen 'em. These guys were pros.

But that's the thing, right? Sarge was wearing your mousepad, and the gelatinous material contained within stopped the shuriken and saved my puppy's life. He's good, you know what I'm saying?

What do you mean, where are the bodies? They're ninjas, dad, they're silent assassins. They don't leave bodies laying around. The fourth one grabbed the evidence and took off. Duh.

So Sarge comes into your bedroom to show you what a good dog he is, and the next thing you know, we're both grounded? Fine, dad, see if I care if this family is flagless by the end of the month.

Also, I'd like to see how well Sarge can defend our house while locked in the garage. Bah.

When It Comes to Online Gaming, I Find That the Mud Community Is the Best Place in Which to Mate with Animals.

File Too Long Loading File Bad Not Here Yet Nnrrggmmgkk