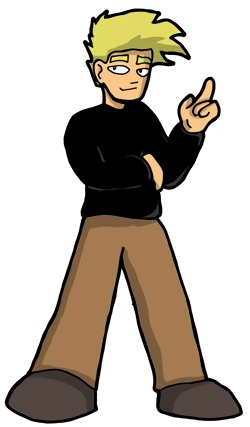 Having worked as a mission-critical System Administrator for Fortune 500 companies, I’ve developed quite the reputation for always having a backup plan. It’s no different now that I’m Operations Director for a gaming startup magazine.

You see, the thing about the Electronic Entertainment Expo is that security is tight. They’re very strict about this being an industry-only show. I was somewhat worried that my crew would be unable to convince them of their credentials, or that our publication was legit.

After all, it’s called “GameNostril.”

That’s why I came up with THE PLAN. I spent over a month crafting this sucker. And to make sure things went without a hitch, I personally waited in line this morning with my team to make sure they got their Expo Press badges in good time.

Slowly we snaked our way up to the registration desk, sandwiched between a crew from Wired News and some cameraman from CNN. At last it was our turn, right on schedule according to my stopwatch. I handed over our credentials, and everyone opened up their wallets and identification. “I think you’ll see that everything’s in order,” I said in measured tones. “We’re GameNostil, and we’re about to blow!”

The olive-skinned woman behind the desk brushed aside a lock of black hair and nodded. She punched some things into the computer. “Very good,” she said, returning our papers.

“Is there a problem?” I asked, withdrawing my cell phone.

“Nope, looks good. Your badges will be printed shortly,” she explained.

“Hah! Well, we’ll just SEE about THAT!” I said, pressing the cell phone to my ear. Suddenly, I stopped cold. “What did you just say?” I asked.

“You’re all good to go. Pick up your badges at the counter,” she repeated.

“We’re actually IN? You’re letting a magazine called GAMENOSTRIL into E3?” Slowly I lowered the cell phone. “We’re in!?”

I hadn’t planned for that.

Cold shock ran through my limbs. Didn’t she understand? I had GEARS! And I’d SET THEM IN MOTION! As early as two weeks ago!

Frantically I dashed out of the registration area and flung open the glass doors to the center. Just above the convention hall a Blackhawk helicopter rattled the windows. I waved my arms wildly in the air. “CALL IT OFF!” I shouted into the din. But it was the least of my worries. What time was it? 8:47 AM?

I rushed back inside, just in time to see a man in an Incredible Hulk costume burst through the Microsoft Xbox banner. “No Hulk, no!” I roared. “It’s okay Hulk, go back!”

Even as security rushed to the scene, I was already punching numbers desperately into my cell phone. “Tell Vin Diesel it’s off, call off the Dees-man!” I yelled into the speaker. But by this time it was already 8:49, and power to the West Hall flickered, signaling that the Internet connection had been severed by the crews in the underground tunnels, just as I’d arranged.

That was neither here nor there -- the worst was yet to come. I was out of breath by the time I reached Susan, who was dressed as a character from The Matrix and stood by the telephone booth in the concourse. I grabbed both of her arms, sweat pouring from my face. “I want all the gerbils accounted for! Now!” I panted.

Susan appeared crestfallen, then looked over at the phone. “It’s too late,” she whispered.

I slumped against the wall in speechless horror.

Off in the distance, the Incredible Hulk roared.

You guys, I’m serious. This big E3 tradeshow is our best and only chance to buy Vivendi!