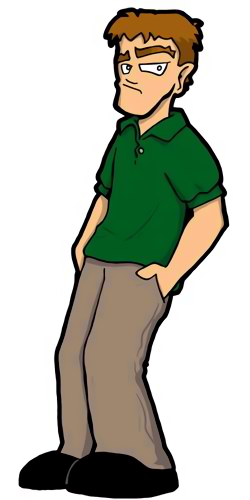 Inspired by the guy I met with a big-screen surround-sound wireless Game Boy, I knew that I needed to really get my geek on. After all, a techie like me can’t back down from a challenge. That’s why I decided to see if I could play EverQuest on my cell phone.

There were, of course, two ways to tackle this problem. The first was to use a standard non-color cell phone with a text message capability, then rig up a webcam to your PC and run the output through a JPG-to-ASCII art converter, then send the updates to the cell phone... Of course that would be silly. But that’s why I’d do it.

A much simpler way would be to use my Nokia 9200 cell phone, which has a full color screen. You would load EverQuest on a Citrix terminal server, download the Citrix client for Symbian OS (what the Nokia 9200 uses), and presto! You dial into the terminal server via the cell phone and open EverQuest remotely. Sure it’s slow, but you can actually play it. Only a crazy man would do it ... but I am just such a man.

I had so much fun playing EverQuest on the bus that I started loading all kinds of massively multiplayer games on there. Within a week I had Camelot, Earth & Beyond, Asheron’s Call, and a half dozen others. It was on one such game that I saw something really disturbing.

I was sitting in the reading room of the Inn when suddenly a wizard in dark robes clambered in through the window and shut it behind him. Even in my tiny cell phone screen I could see that he was beaten and mauled, perhaps on his last legs. I frantically hit key strokes in order to give him one of my healing potions, during which time he babbled to me in short, typo-ridden sentences.

I wanted to tell him not to be ridiculous, but I knew that it would take me too long to type it in on my tiny cell phone keyboard. I just had my character nod.

“No, I’m serious,” he said, emoting angry gestures. “I’ve been killed 10 times in the last two hours -- there is a well-organized plot to player-kill me!”

As if on queue, two of the men who had been hunting him burst through the door to the reading room. One was a burly man in shimmering gold armor, the other was a wizard in sparkling robes and a turban. “Found him!” they shouted. Their intended victim called out for my help, but what could I do? How do you explain to someone that you’re no good at player-combat because everything you do has to be typed into a cell phone?

Before I could finish thumbing out the words “Let’s talk this over,” the attacking wizard rooted his victim to the floor with clinging green vines and the fighter neatly lopped off the head of his prey. With nary a word they looted his body. Then -- here’s the weird part:

They gave me all his stuff.

Then they ran off, presumably to find him again wherever he respawned. Weird. Sometimes I just don’t understand the online RPG crowd.

[Thanks once again to Joseph Pizzitola, who submitted his suggestions for ways to play MMO games via cell phone.]

As a professional gamer, my recent onset of motion sickness has qualified me for disability benefits.

Percy is in need of comforting after the second Harry Potter movie.