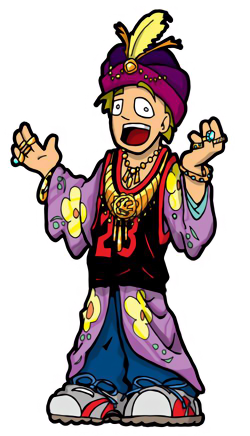 Dinner was absolutely fantastic, and the service couldn’t be beat. Just a week and a half ago, I was just another college student who played a lot of video games. But thanks to my habit of Twinking out newbies and their generosity in return, I found myself sitting in a four-star restaurant eating filet mignon. I wore a crisp black tuxedo while across from me, my gorgeous date Claire smiled at me from within a form-fitting sequined gown. It all seemed a little surreal, but who was to question it?

Mr. Butterfield, my benefactor, had given me the keys to his beach house ... just as I had given him the keys to my in-game villa. After dessert I suggested to Claire that we make our way over there in my new Jaguar. We roared down winding roads chatting and laughing, and finally pulled up next to a great three-level house partially suspended over a low cliff with a panoramic view of the coast. I was in awe. Giggling, Claire and I walked up the sand-swept steps arm-in-arm, and I opened the front door.

From here, my story gets weird.

Inside a giant high-ceiling den dominated by a great stone fireplace, two rows of chairs had been set up with an aisle between them. And, at the end of that aisle, on a raised podium before the fireplace, stood a young blonde-haired man in a black shirt. He had a microphone and PA system all set up.

Moreover, all of the chairs were packed full of people except for one. Of the people sitting down, most were young guys like myself dressed in formal tuxedos. Many others wore basketball jerseys. One wore a Japanese robe, another a Chinese business suit. I froze in place and stammered.

“Ah, our last Twinker has arrived. Come, sit down! We’ve been expecting you,” said the blonde-haired man with calm authority.

Claire guided me to my seat, pulled out her PDA, and made a brief note. “That should be the last of them,” she said to the speaker.

“Great, let’s get started!” replied the man, addressing the assembled crowd. “I presume you’re wandering why I gathered you all here this weekend,” he said as Claire dimmed the lights. “My name isn’t important: You can just call me the Administrator. After years of critical server administration at Fortune 500 companies, I learned the value of planning. And, through such careful planning -- as well as use of my old contacts -- I have ensured that the lot of you will have gathered here tonight.”

He placed both hands on the sides of the podium and loomed forward dramatically. “Yes, you gentlemen, are no ordinary RPG players. You’re the Twinkers. Not just any Twinkers. You’ve been selected because YOU are the finest Twinkers on the planet. And Twinkers, as we know, are the most powerful players. They have access to the best equipment and a generosity that only those of superior intellectual acumen possess. You heard me gentlemen: You are the best. Of the best. Of the best. Give yourselves a hand.”

I clapped, uncomfortably, wondering what I was doing there.

“I presume you’re wandering what you’re doing here,” The Administrator continued. He turned to pull down a large white screen. “Claire, hit the slide projector.”

At once, a surveillance photo appeared of a long, gaunt man in black pointed robes. The photo -- obviously taken through a telephoto lens -- showed him preparing to enter a Taco Bell. The man in the photograph glanced suspiciously over his shoulder with yellowish eyes, as though he knew he was being watched. “This, gentlemen, is my arch nemesis: The Unix Server Administrator, upon whom I have vowed revenge. My sources have informed me -- oh, believe me, good server administration requires sources -- that the Unix Administrator is preparing a deal with The Korean Mafia. You see, he collects lewt in online RPGs, and the Koreans sell it on eBay for illegal cash. I have on good word that midnight on Sunday the drop will take place.” He clicked a button and a new slide appeared, showing the Unix Administrator’s in-game character.

The crowd shuffled in their seats and murmured.

“What’s your role in all of this? Simple, gentlemen. We need to stop that transaction from taking place, ensuring that the Korean Mafia comes after our friend with Daewoos and baseball bats. And to do that, he must be player-killed. Each time he is killed he drops a valuable piece of lewt. Keep in mind that the Unix Administrator is a cheating bastard: He has hacks that revert his character during the midnight update so he gets back any items he loses. He can dupe, and camp, and auto-locate item spawns -- whatever low-down hack he can find on the net, he uses. There’s only one way to ensure that every single item on his inventory is dropped, and that’s to player-kill him. Repeatedly.”

The mumbling grew louder; he was talking to the wrong crowd when it came to player-killing.

Unphazed, he continued talking louder. “To completely wipe him of all his items, he must be player-killed 36 times over the course of 24 hours. Furthermore, he must be dead during Monday’s server backup, so that he can’t use his cheat to regain his lost inventory--”

That was just too much. A man in a tuxedo and a turban leapt to his feet. “Player-Killing a single player 36 times in 24 hours!? That’s impossible!”

The whole crowd began to roar with disapproval at the plan. “Gentlemen, gentlemen, please!” cried the server guy, arms outstretched. “I have chosen you because I can think of no better-equipped group of players. Furthermore, if the Unix Administrator’s powerful items fall into your hands, I can assure myself that they will be equally distributed to everyone on the server in the fairest way possible. Here, to help convince you, I ask that you please all watch this movie. Claire?”

Claire hit a button and soft, mournful music began to play. The slideshow projector showed a new image, that of a young newbie playing the game, wearing little but sandals and a loincloth. More pathetic images followed, and our host narrated:

“These sad individuals are underdeveloped characters, and they lack the basic weapons and armor needed to survive in the harsh RPG environment. Many of these newbies have a lot of love to give, but circumstance has left them without even level one equipment. But you can help: For just 39 gold pieces a day -- less than the price of a cup of coffee! -- you can have an impact on a young player’s life. With your support, they can get new weapons and the medical care so desperately needed as they fight rats and bunny rabbits outside of the newbie dungeons near town. YOU can make a difference! Please give -- give to the United Newbie Lewt Fund. Because their time is a terrible thing to waste.”

The site of those poor newbies calmed the crowd. We all had big hearts: We were Twinkers. “What can we do to help?” asked the man in the turban.

“Simple,” answered our host. He flicked the slide once more. “You can... KILL THE UNIX SERVER ADMINISTRATOR! KILL HIM! STAB HIM! MAIM HIM! MAUL HIM!”

The lights in the room turned on and Claire pushed forward a stuffed training dummy dressed in black pointy robes. A black-and-white picture of his character’s face was taped onto the dummy’s head.

“KILL! KILL THE UNIX SERVER ADMINISTRATOR’S CHARACTER! TAKE HIS STUFF AND GIVE IT TO RANDOM PLAYERS! He must be killed no less than 36 times in 24 hours. Find him, camp him, and destroy him. If he goes to China, I want a dwarf hiding in a bowl of rice ready to pop a battleaxe in his ass. YOU! You, in the Michael Jordan Jersey! Kill him! KILL THE UNIX SERVER ADMINISTRATOR!”

With a harrowing scream, one of the Twinkers rose to his feet and charged the Dummy, tackling him to the ground.

“Kill! Kill! Kill!” Cried our leader. Once by one, we broke down and charged the dummy, screaming. One guy hit him with a chair. Another suplexed him into the punchbowl. It was truly a ferocious site.

Our host turned up the volume on the PA system. “Gentlemen, if you’ll proceed upstairs you’ll see I have a LAN set up with 50 workstations, as well as coffee and cases of Mountain Dew. Log in, make yourself at home... the operation will begin at midnight tonight, just after the character backup. Godspeed, gentlemen! Godspeed.”

As I drank Mountain Dew and tried to decide if I was really doing the right thing, I overheard the Administrator talking to Claire. “Do you really think they can kill him 36 times in 24 hours?”

The administrator scoffed. “Possibly,” he said. “But if they don’t ... I always have a backup plan.”

My companions may have been of a different mindset. But me? Could I kill a man's virtual avatar in cold digital blood? I don't think I could. As I pondered, his character stepped into view and the clock struck midnight...

Laugh all you want, this is the only way I can play Need for Speed without getting mad vertigo

So I said, “Honey, before we jump right in and buy a kitten, maybe we should consult The Sims”