Good Quality Assurance is hard to fake. Especially wearing this. 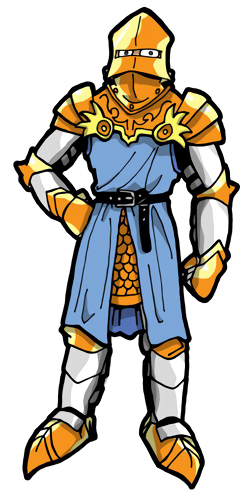 You see, for a couple of weeks now here in the programming group we've come up with a scheme to fool upper management into thinking we have a QA department. Our Quality Assurance department used to consist of Jake -- but when he left, nobody told the brass 'cuz we didn't want his department cut from the budget. Instead, every morning we take turns coming to work wearing various face-concealing medieval outfits. Jake was a strange bird, anyways -- nobody knows the difference. I was skeptical at first but even I've come to admit it was a pretty good plan.

Until that pale wedge-shaped freak of a server guru came onto the scene to set up a new DNS server. He set up a temporary workstation in our department and kept looking over his shoulder at Jake's cubicle, squinting. "Who sits there?" he asked me yesterday afternoon.

"Jake, Jake Milbourne ... I remember Jake Milbourne well," the craven administrator said. "We used to game together, he and I. Second edition. Perhaps a little Ravenloft on occasion. Ah, Jake. Jake ... Jake." Without another word he swiveled slowly back to his work. But the way he kept eyeing Jake's cubicle worried me. So I told Murray, our department head.

"Look here, creepytechguy is starting to suspect something," Murray said, calling an emergency meeting. "So Steve? I want you to wear the armor all day tomorrow. That's right, ALL DAY. Full plate. Go full bore. Don't hold back. Be Jakey. Be one with the Jake. Embrace your inner Jakeness."

"Hey, wouldn't it be better if we said that Jake's calling in sick?" I asked, not wishing to don the hot sweaty armor for a full day.

"WHAT!? Call in sick!?" Murray boomed. "Look here, nobody slacks off in my department. What the hell am I PAYING him for, anyways?" He tossed the helmet at me. "Helmet! NOW!" he said.

When I came in this morning, my glasses were steaming up because the heat inside my armor was so intense. I clinked through the front door and waved to the receptionist the way Jake would've. Then, I sat down at Jake's cubicle, smashing Capn' Crunch under my steel-toed feet. I stared awkwardly at the screen, unable to type with gauntlets.

Hours ticked away with no sign of the Unix administrator -- long enough that my stomach began to settle down. But then he strolled in at 11:30, keeping his usual tech-guy hours. I had just started to eat my lunch -- I was trying to push pieces of a peanut butter and jelly sandwich through the slats in my helmet -- when he turned his chair around with a squeak and aimed his glassy conniving eyes at me.

"Jaaaaaake Milbourne, we meet again!" he said. I turned around and waved to him. "Yes, yes, it's been a long time, hasn't it? What have you been occupying yourself with?" I waved my clanking arms around. "Ah yesss... water sports. And your girlfriend?" I sliced my finger across my neck. "No! How?" I rocked back and forth and bounced my fists up and down in my chair. "Skiing accident?" I clapped my gauntlets together like a seal. "Hit a tree outside of Belgrade? The cruel irony!" he roared. I nodded, pointing to my cheek.

"Sorry to hear that," he said. "By kernel we had some good times though, didn't we?" I nodded. "Remember the Village of Homlet module?" I shook my fist in the air. "How about the Hall of the Fire Giant King?" I clapped my gauntlets to either side of my head like Macaulay Culkin from the Home Alone movies. "And defeating the Dwarf King?" I slammed my fist into the palm of a gauntlet and nodded enthusiastically.

At that, he stood up and roared. "LIAR!!" he cried, grabbing a staff and striding toward me. I clasped the arms of my chair in fear, for once glad to be wearing armor. "There was no Dwarf King! And Jake never ate peanut butter sandwiches in his armor for fear of getting jelly on his breastplate. YOU are an IMPOSTER!"

Before I could think to get up, he spun my chair around, grabbed it by the back and began wheeling it down the hall. I was in a panic! I'm just a videogame programmer, I'm not cut out for medieval Quality Assurance espionage. He wheeled me straight down the hall toward the set of closed wooden double-doors that delineated our main conference room. I gasped within my helmet and raised my armored feet up into the air as he shoved me through the doors with a resonating BOOM!

A board meeting was in progress inside. The leaders of our company were in there, wearing crisp suits and power ties, drinking water from crystal pitchers and looking at pie charts. Most of these guys I haven't even seen before, they were so high up in the company. From the instant the doors crashed open they all reared up and focused their attention solely on me. I rolled to a stop, crunching my breastplate up against the enormous and expensive conference room table.

"You have an IMPOSTER in your MIDST!" growled the administrator, addressing the room with a flourish of his robes. "Your programming department claims to have a Quality Assurance person on staff, one Mr. Jake Milbourne, but you will find no Jake Milbourne at this company! Just a group of impostors taking his check every other week and using the money to buy armor and adult website subscriptions!"

"How'd you know about those?" I asked, but my voice was muffled by my helmet. And the peanut butter.

"Tell me, Mr. 'quality assurance lead,'" he asked, "WHAT'S THE DAMAGE OF A STANDARD HUMAN HALBERD?"

"Critical or non-critical?" I squeaked.

"No stalling, answer the question!"

"LUCK!" spat my enraged accuser. "Gentlemen of the board of directors, what do you make of THIS!?"

Before I could react, he stripped the helmet off of my head. I was greeted by a blast of cool air and by the even colder stares of the men in suits around the table.

The President of the company was the first to speak. "You know, the truth is ..." he shifted in his enormous chair uncomfortably. "None of us really know what this 'Jake' guy looks like."

"Never spoke with him," agreed another Vice-President.

"I don't like ... employees," said our Financial officer. "Dirty people. Drive small cars. I try not to breathe their air."

"What are you, anyways? Some kind of Windows NT administrator?" the President asked. "Never mind, quiet. You're some kind of creepy tech guy 'cuz I saw you walk in at 11, someone said you were on contract. Now, you're asking us to take your word vs. the word of a full-time employee. Frankly, I find that position untenable. Now, if 'Jake' here wants to continue assuring the quality of ... what is it that we make here?"

"Computer games," the VP of Marketing reminded him.

"Yeah, I suppose quality is A-OK so long as it has the board's approval, and I can see this is a quality individual by the cut of his extremely expensive suit of armor here," the President continued. "What kind of armor is that anyways, son?"

"Good good, you go back and 'work' or whatever it is you do in those little pens. Out! Scram! And somebody fire that Windows guy."

"UNIX!" the administrator spat, fists shaking in rage. But Security was already grabbing at his elbows.

As for me? Well, Murray gave me a bonus for being the best Jake we ever had.

I guess the President must have made an impression. Most of the other VPs are starting to show up wearing suits of armor as well.

You want to play Battlefield again? What, you're missing a hood ornament?

Lemme tell you about the geek that got away...