I was irradiated by a failed Game Boy backlight installation 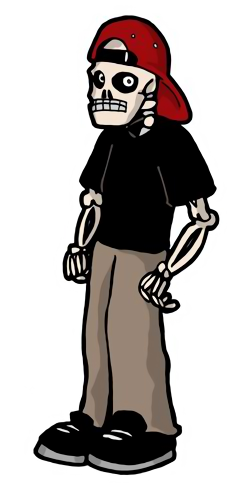 Hey, what's up? Remember last week I told you about my disastrous Game Boy Advance backlight installation? Things have only gotten worse. I think I was irradiated. I can expose film ... while it's still in the camera. If I cup my hands around a bagel I can toast it. My dad always told me that 'cuz of video games I have no life -- well, now I've got a half-life.

My suspicions were confirmed by Raymond, the kid who overclocks all his appliances. He squinted at the remains of my Game Boy through flickering eyes. "Ah yes, I see!" he said, matter of factly. "This Game Boy's gone nuclear. If only we could harness this energy for good instead of for Mario!"

I couldn't really hide my disgust. "C'mon! When people get irradiated, they're supposed to get superpowers! You know, like Spider-sense or Incredible Hulkism. What am I? Broken Game Boy Bagel-toasting man? What kind of superhero is that?"

"I imagine that your increased electromagnetic output would make you invisible to those security scanners at the doors of Best Buy," Raymond said, scratching his chin. "You know, the ones that are supposed to beep if you try to walk out with something without paying?"

"I didn't blow up my Game Boy to pursue a life of crime!" I protested, but Raymond was already calling up the store locator on the Internet.

"People are far too quick to pass judgment on Supervillainy," Raymond told me forty-five minutes later as I wheeled him through Best Buy in my shopping cart. He was crouched inside of his cardboard box and tossing random Xbox games into it as we wheeled along. "Supervillainy is a blast. If the underclocked masses could only wrap their puny heads around this whole "good/evil" problem of poor nomenclature, they'll all throw down their namby-pamby ideas of "government" or "rights" and become supervillains as well. That's why I admire a man like Sting."

"Sting is a supervillain?"

"You didn't KNOW? Great gigahertz, the fact that he keeps his work a secret makes me respect him more and more every day. One of these days one of his rocks will slam into the Earth, and his master plan will be revealed. Oh, hey, turn the cart here."

I wheeled to a stop in the home theatre section.

"Now, pick up a big-screen TV," he commanded. "One of those 45-inch plasma-screen jobbies."

"We can't just walk out of here with a plasma-screen TV!" I hissed.

"SILENCE, slow-to-refresh! The minimum-wagers watching the front door are mentally prepared to stop people from sneaking out with a CD in their jacket pockets. They're intellectually incapable of processing the idea that someone would attempt to just stroll out with something as conspicuous as a wide-screen TV. In fact -- get two! Do it! Do it now!"

It was difficult to push the cart once we'd gotten both TVs propped inside at odd angles. Slowly we wheeled toward the front doors carrying roughly $8500 in unpaid merchandise, including a half-dozen GameCubes. But as we approached the doors, the sensors suddenly let out a high-pitched whine. Red lights turned on and blue-shirted employees started running toward us.

"Oh NO!" cried out Raymond. "Your random radioactive noise signal actually triggered off the alarms, rather than confusing them! This always happens when I calculate electromagnetic response harmonics on the computer instead of in my head."

Before I could answer, we were surrounded and a burly rent-a-cop blocked the way through the doors. "Excuse me, son," he said, eating a bagel with a smear of cream cheese blotted in the corner of his mouth. He talked with his mouth full. "Did you just set off the alarm with all that merchandise?"

"No officer," I explained. "I just randomly leak radiation." To prove it, I grabbed his bagel and toasted it.

Raymond was beaming as we wheeled through the parking lot. He turned on his cell-phone and speed-dialed someone. "Yeah, Sting?" he said into the phone. "We've got the Merch. You can start the countdown."

The Army has a videogame? Big deal, the 'CIA Black Ops' game has been out for years. In secret.

We got no choice but to send in Earls. He's the best camper this army's got.