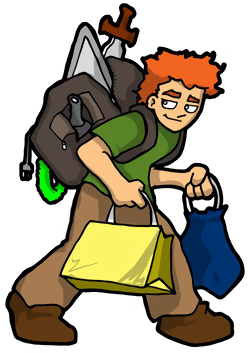 [All this week -- special Victims as part of GameSpy's Massive E3 Coverage!]

Hi. My name's Thom, and I'm a Tchotchke-holic. I live for swag. Sure, The Electronic Entertainment Expo is an expensive show to attend, but I more than make up for it with all the l3wt I collect from developers.

Free tee-shirts? I scored sixteen. Buttons? Thirty-seven. I got a joystick, and a free wireless controller. Someone gave me a giant inflatable sword. I got six free magazines, four yo-yos, and an inflatable Mr. T. (Did you know the real Mr. T was actually at the show, promoting a Rocky game?) I just can't get enough swag. If it's free for the taking, it's mine.

One time a famous skateboarder took a spill on the half-pipe, and I grabbed his tooth as it skittered across the floor. I sold it on eBay for $36 bucks.

Of course, the best time of the show for swag hunters like me is the closing fifteen minutes on the very last day. See, by then, all the people working the displays are realizing how much it's going to cost for them to ship all the extra swag home. You can score PHAT L3WT when they get desperate. That's how I ended up with this life-sized Duke Nukem store display, this BMX bike, and a 40' x 10' banner that says "More Displays In Kentia Hall."

But my biggest triumph was right after the show ended. I slipped into the ladies room hoping to snag a souvenir roll of toilet paper and I stumbled on The Greatest Piece of Swag There Ever Was (tm). There, huddled in one of the stalls and reeking of sweat and alcohol, was a life-sized Mario! How did it get there? Who cares! I grabbed that sucker by the legs and started to drag it to my car.

For some reason the plush stuffed Mario was extremely heavy. His big foam head made the loudest "Thunk, thunk, thunk" as I drug it down the stairs feet-first.

Since the seats of my car were already filled with swag, I was going to have to put my new-found Mario into the trunk. I opened it and started hefting the damn thing in there just as a whole group of schoolkids started to walk down the nearby sidewalk. They saw what I was doing -- stuffing the body of Mario into my trunk -- and started nudging each other and pointing. They stopped in their tracks, faces frozen in horror. One of the older kids ran off, presumably to get help. "Oh no, no guys, you got it all wrong," I tried to explain. "This ... this isn't the real Mario, see?"

Just then, to my surprise, the figure started to move. I stared at it, wide-eyed, as it started to clamber awkwardly out of my trunk. "It's-a me, Mario!" a disembodied falsetto voice cried. "Whatsa going on?"

Thinking fast, I pushed his face back into the trunk and tried desperately to slam the lid. "Don't listen to him kids! It's just a little game me and Mario here play all the time! Everything's under control."

Calmly I walked around to the driver's side of my car and opened the door to get in, pretending that I couldn't hear the banging from inside the trunk. Before I could sit down though, a meaty hand grabbed me by the shoulder and spun me around. The older kid who'd run off earlier had returned with help.

I was blinded by the glimmer of gold jewelry, and above his glaring eyes his fierce mohawk aimed at my face like the barrel of a gun. "I PITY tha foo' who messes wif da M-Dawg," he said, grabbing me by the collar and lifting me off the ground.

"Kick-a his arse and take-a his wallet!" cried a tiny voice from the trunk of my car.

Mr. T shook me like a limp ragdoll. "Shut your jibba-jabbah and open the trunk!" he demanded. I beeped it open with my little key-remote and Mr. T dropped me to the asphalt as the children cheered.

And that's the last I saw of him, officer. Well, both of them, actually. Mario and Mr. T walked off into the sunset, hand-in-hand, the ripples of heat cascading off of the hot Los Angeles pavement behind them. Actually, it was quite beautiful. What's that? Oh no, please sir, don't make me give back the Mortal Kombat kiosk. Don't you think I've suffered enough?

It's okay, though. I managed to snag one of Mr. T's chains. SCORE!