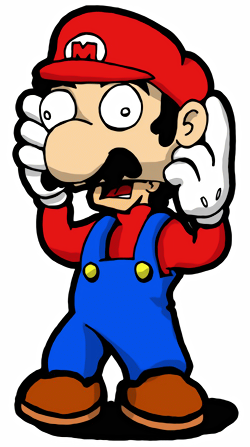 [All this week -- special Victims as part of GameSpy's Massive E3 Coverage!]

Hello, it's-a me, Mario! You might be asking yourself, "How did my favorite video game character end up huddled inside a ladies room stall reeking of liquor?" In truth, I'm not the real Mario. My name's Charles. I'm a grad student. I dressed as Mario to sneak into the the Electronic Entertainment Expo with my friend who looks just like Nintendo celebrity Shigeru Miyamoto.

It was a dangerous move, since none of us had authorization to get into the show. I almost put a security guard in a choke hold before we got through the gates, and my friend Gary kept whining insistently, so I was all too happy to ditch him and the rest my friends. "Let-a the gaming-a glory begin-a!" I screamed in a falsetto voice, tearing off onto the show floor.

First, lemme tell you about wearing 30 pounds of foam. It sucks. Took me twenty minutes to take a leak. And another thing. Never before in my hormonal life have I seen so many firm young bootys stuffed into miniskirts than at E3. Where do gaming companies get their hoochie supply? I'd like to take a skinny dip into their talent pool. But I'm wearing foam gloves as big as car tires, so I can't even pinch 'em. I tried to pat one firm bottom and inadvertently knocked her into a display stand (s'okay, I blamed it on a nearby Pikachu). Stupid gloves. Whenever I tried to play a game on the console I couldn't help but hit all the buttons at once.

Then later in the afternoon, in the distance, I saw the cops dragging me friends off of the show floor. I suspected our jig was up, and I was going to need to make a hasty exit. I grabbed the nearest tube-topped booth babe and said "Hey-a bambina, it's-a me, Mario, the plumber. You wanna go back-a to my place so we's can lay-a some pipe?"

Let me tell you, no amount of foam protects a man's nards from stiletto heals. Pain like that will be felt for generations of my family.

There I was, down on the floor, weeping wetly into my head. Slowly I lifted my face, swimming in misery, and beheld the visage: The Doom III Booth. Shining like a glimmering, bloody beacon. I crawled toward it on all fours like a man possessed. If I couldn't play games, if I couldn't have the booth babes, and if I was gonna have a run in with the cops, I'll be damned if I was gonna leave this place without seeing Doom III.

Trailing sweat and urine, I clambered toward the booth like an animal. Halfway there, a guy in a Mohawk and a flaming Vegas tee-shirt stooped down and said, "Mario, my man, you been hitting the question block like a MOFO or somethun'." And then he took out a hip flask and poured some Spiced Rum into the mouth of my costume. I would have welcomed the relief, however, Mario's mouth is actually where my eyes are, and the hideous burning began. "My EYES-a! Oh GOD my EYES-a!" I wailed. "You Farking Teat-a-licker!"

By the time I reached the Doom booth, a broken heap of a man, the people waiting in line took pity on me. "Mario wants to see Doom!" they said. "Let the plumber through!" Two burly gentlemen in NVIDIA tee-shirts picked me up by the overalls and hurled me toward the door that led into the tiny chamber where they were showing the game. With a loud thump, my enormous head wedged itself into the narrow doorframe. I couldn't move an inch. After a quarter of an hour, I passed out.

I came around to the sound of the rhythmic whumping of id founder John Carmack hitting me in the face with the butt end of a fire extinguisher. Free at last, I tumbled backward into an assembled throng. "I saw that move in Super Smash Brothers," someone said. With blurred double-vision I saw a cluster of rent-a-cops suddenly point my way. They pulled out handcuffs and moved in to make the arrest.

Limping, I struggled between the crowds. I pushed down a newscaster who was doing a special report on videogame violence, then surged bloodily toward the Grand Theft Auto 3 booth. There I was assaulted by little children who clustered around me and wanted my autograph. What was the deal? I had to dress as Mario and sneak in with false identification, and what, people just let their kids waltz into the show? Still, as they clambered around me and tugged at my costume, it made the cops stop in the tracks. They couldn't very well arrest me in front of the kids. The trauma of that sight would last a lifetime. So I started signing autographs for them. "I did-a it all for-a the children!" I boomed.

Luckily, the Grand Theft Auto press team was handing out baseball bats with their game logo on 'em. I grabbed a couple, handed them to the kids, and whispered to them: "Come-a play my new game-a! Whacka da pigs-a in the knees-a! Then find-a me later and tell-a me your high score-a." Squealing with glee, the children pounced the cops, who would have gotten away had they not knocked over the press crew filming the videogame violence exposé. I'm not sure what they're going to do with tape of Mario telling children to attack cops with baseball bats, but I didn't have time to worry about it. I had my opportunity! I darted between the crowd and eventually hid here, where they'll never find me: in the mezzanine level ladies' room.

I can't seem to get my mask off, but as soon as I figure it out, I'm planning to puke. Is that okay with you? Then I'm going to suck the rum out of the tattered remains of my face and pray for a swift death. Thanks.

[With a clatter and a bang, the stall door suddenly flies open. Standing on the other side is a guy in the REAL Mario costume ... holding a baseball bat...]