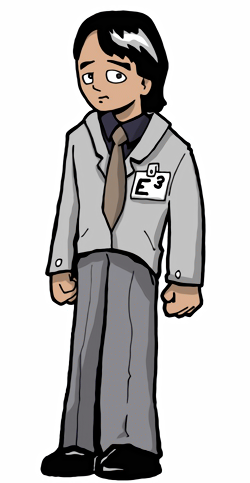 [All this week -- special victims as part of GameSpy's Massive E3 Coverage!]

Hello. Don't be fooled. I'm not the real Shigeru Miyamoto -- creator of Mario, Zelda, and numerous other Nintendo classics. My name is Gary. My uncanny resemblance to the legendary Miyamoto would have been of little consequence were it not for the machinations of my fellow university students, who were desperate to get into E3, the largest gaming convention in the world. Sadly, it is a trade-only event... But this was worthy of little consideration for true gaming fans.

"Hey Gary!" they said. "Hold on a minute -- put on this suit jacket. Sweet Luigi! You look JUST like Miyamoto!" My friends hatched a plan wherein we would all rush the front doors of E3, claim to be Miyamoto and company, and waltz right in without the necessary passes. Pretty soon they were coaching my voice to thicken my accent. They never thought to ask me what I thought of their plan. They just assumed I would go along. Oh, how I hate to be soft and pliable. Would the real Shigeru accept this kind of treatment? Would he bow in to their peer pressure? I can only sigh and wonder what a man in his position would do.

To complete the illusion, my friend Charles rented a Mario costume with an enormous plush head. His logic was that nobody could deny that I was Shigeru if I was accompanied by Mario, and we'd all get in. Dressed in suits and ties and Mario costumes, we must've looked like quite a scene as we taxied to the Los Angeles Convention Center.

So I told him, "Listen, pipsqueak! When we get out of this cab and walk toward convention center security, you better get Shiggy with it or I'm gonna kick you ass up and down the Hollywood Hills!"

Bad enough to be in a stinky cab in sweltering Los Angeles weather with a giant Styrofoam HEAD on my ... head. But the whole way up there I gotta listen to Gary -- our mealticket -- whining about how this is morally wrong. You want to hear morally wrong? How about a trade show showing the PHATTEST games in the universe and it's limited to "Industry Only." Let me tell you. Not since Captain Lou has anyone had better reason to don the Mario rags, baby.

So we stumble up to the convention hall doors dragging Gary beside us, and security stops us to look at our badges. But we don't need no steenkin' badges. "Shigeru Miyamoto! Shigeru Miyamoto!" we're all yelling. Everyone's pushing and shoving. "Shigeru has to get through!" "Do you realize who this is?" "Mr. Miyamoto has an important Nintendo appointment." And everyone's buying it. People are backing away. They're pointing at Gary and taking pictures.

Then one of the rent-a-cops looks at me and actually has the nerve to say, "And who are you?" WTF? So I tells him, in a voice muffled by my enormous noggin, "It's-a Me! Mario! You farkin' Ice-a hole-a!"

Then I tried to flip him off, but these gloves only have four fingers, so I was confused as to which was the middle one.

As simple as that, we were in. The whole group of us. I felt very, very dirty. Immediately of course my friends abandoned me and split off in all directions to see all the new games, except for Charles who announced through his foam Mario head that he "Had to take-a leak-a" and stalked off to the bathroom.

But before I could get my bearings an elderly Japanese man in a dark suit grabbed me by the arm. "Shigeru-san!" he said. "You left your badge at the booth. You must always keep your proper identification with you at all times!" With a respectful bow, he clipped Shigeru Miyamoto's nametag onto my blazer and then took me by the arm. "Come, the press is waiting for your three o'clock! We worried you were stuck outside, unable to return without your badge."

Over his shoulder, I saw security frisking the real Miyamoto, while he pounded his fists helplessly on the glass. Should I have said anything? At this point, I was too scared to call attention to the snafu. After all, these things tend to work themselves out.

Talking to the press was far easier than I thought. Newsweek, Time, CNN, GameSpy, and others asked me questions. I pretended to be shy, and answered by talking about how much I like Mario. And the GameCube. And ... whatever else I could think of. They ate it up. Every word I said was so important, they wrote it all down.

Within an hour I was on the show floor telling Nintendo executives how it should be done. I told them how incredible online gaming could be. "Shigeru-san, why have you not spoken up before?" they asked. I just shrugged. In the distance, I saw Charles, still in his Mario costume, get kneed in the balls by an angry booth babe. My life had certainly taken a bent toward the pleasantly surreal.

Suddenly, a group of balding executives with severe-looking glasses barged into the booth, dragging with them my group of university friends, all but Mario (who presumably was doubled over in pain somewhere.) Even more disturbing, two armed security guards followed behind. "Shigeru-san!" the executives asked, their voices restrained but quivering. "These unlicensed convention attendees claim that you allowed them onto the show floor. If that is indeed the case, it would bring GREAT DISHONOR to the Nintendo name for having caused such a scandal!"

I looked at my friends, then back at the executives. "I've never seen these men before in my life," I explained. "Take them away."

Security grabbed my squealing friends by the arms and began to forcefully eject them from the building, but not before they cried out to me for help. "What are you DOING!?" they hissed.

"I apologize gentlemen," I whispered to them. "But sometimes, your career has to come first."

"We've been having a lot of trouble with security," the cops explained to me. "Why, just outside some crackpot is claiming to be you. Don't worry, we cuffed him and handed him to the Marines."