It’s easy to sneak these new, smaller PC game boxes into the house. But that’s not always a good thing. 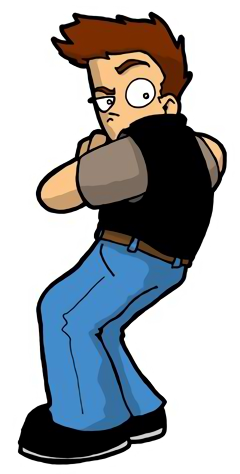 So there I was, stepping out of my car, with an EverQuest expansion firmly ensconced in each pant leg and the strategy guide shoved down the back of my pants. The plan was, I’d stroll in, say hello to my wife, casually make my way over to the office, and unload the goods under the couch next to my hidden collection of Maxim magazines. I’d become a master at sneaking games into the house. Steady now. Take it easy. Nice and casual, that was the plan.

I stepped through the door and gave my wife a kiss on the cheek. But before I could get away she grabbed my hand. "You’re just in time to watch Friends!" she announced, pulling me toward the couch. Our Thursday ritual! How could I forget? What could I do? I couldn’t say no without arousing suspicion. So I sat down on the couch with her, and I coughed really loudly so she doesn’t hear the crumple of me sitting on the EverQuest guide. Then I saw my pants: They were bulging out! I looked like I had giant robot thighs! Quickly I tossed a blanket over my legs.

It had to be the longest television show ever. First of all, with that stupid blanket on my legs, I started to sweat like a lawn sprinkler. I could feel the strategy guide under my butt getting all groady. To make matters worse, my wife started feeling me up -- of all the nights to get frisky! Her hands kept creeping closer and closer to my pants but I had to keep squirming away, finding excuses. How long can you suck a woman’s fingers before she begins to suspect you’re trying to keep her away from your package(s)?

But then, mercifully, she announced during a commercial break that she had to go to the bathroom. That was my chance! As soon as the bathroom door closed I leapt up from the couch and flung the crumpled games out of my pants and under the end table. But the manual ... it was STUCK. I had to remove my belt, pull down my pants, and then PEEL it off of my butt -- the full-color glossy cover took two hands to remove and came off with a tremendous ripping sound. Then I heard the bathroom doorknob turn and I flung the strategy guide under the couch, just as my wife emerged.

She was wearing a sheer white nightgown with frills and lace in all the delicate places. She took one look at me with my pants around my ankles and said, "Oh BABY! I thought you were being coy ‘cuz you were cheating on me!"

Whoa, that was a close one. "Honey I love you," I said. "We don’t keep secrets from each other!" She rushed forward to embrace me, and things started to get hot and heavy. But then after a couple of minutes, and shortly after my shirt was all the way off, she froze. "What? What is it?" I asked.

"WHY is there an ELF tattooed on your BUTT?!"

Although it DID keep me sleeping on the couch for a week, the thing about the elf butt? Well, it kinda turns me on.

A word of caution regarding PC cooling fans and chinchillas: