I Made the Mistake of Telling My Wife That I Think the Dungeon Siege Farmer Chick Is Hot. 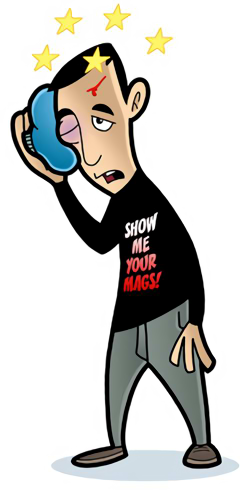 Ow - OW! Those bandages are too tight. Yeah, funny that I ended up here in the clinic again, barely a week after the Mags incident, and so soon after the beating I took last night. Oh, you weren't here for either? Last week I made the mistake of commenting on the size of another woman's Mags in front of my wife. No, "Mags." The little robots that follow you around in Phantasy Star Online for the Dreamcast. Big mistake.

So anyways, yesterday we were sitting on the couch, passing back and forth the bottle of Tequila, and I maybe casually might have mentioned, in passing, that the farmer chick from Dungeon Siege is pretty hot. She was on the cover of a magazine sitting on my coffee table, wearing armor and holding a flaming sword. I didn't make a big deal about it or anything. Really, I mean, it was just a barely mumbled aside. Hardly anything. I guess my exact words were "HOLY CRAP a woman like that needs to get off of that magazine and on to my face!" and then I seem to remember loudly making 70s porn music noises with my lips.

Then suddenly I heard the crunch of a skull -- my skull -- and for the second time in a week the carpet rushed up to greet me. Thank God the Tequila numbed the pain.

I don't know which is worse though. I mean, Carol was kinda upset that she knocked me out cold, you know, it was a bit excessive. So she's been trying to make it up to me. This morning I woke up with a throbbing headache and she served me breakfast in bed. Which was pretty sweet. Except she was wearing a suit of medieval armor made of cardboard and aluminum foil. I didn't quite put two and two together until after I ate and shuffled into the kitchen. I caught her dumping lighter fluid onto a sword she'd made out of a yardstick and duct tape.

"Oh honey!" I said, trying to right my wrongs and be a good husband. "You don't have to dress up like a medieval warrior Dungeon Siege chick for me! I'm sorry about what I said. I love you very much, very VERY much ... even if your Phantasy Star Online character has a contemptibly small set of Mags."

Yeah, it kinda gets fuzzy from there, you know, as to how she set us both on fire. Cardboard burns fast. She lit up like a roman candle. So, here we are! Back at the clinic. But, lemme tell you, I've learned my lesson: don't comment on videogame chicks or you're gonna get burned.

Good thing we were married by the time I discovered the hottie from Drakan.

Want to Know How I Scored 4 Million in One Round of Tony Hawk? Simple. I Waxed My Hands.

I Had a Very Harrowing Atari Pitfall Experience as a Small Child.