You Want to Talk Surround Sound? Why Stop at 5.1? I've Got an 8.6 Speaker System 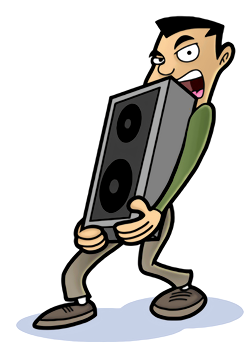 5.1 Surround Sound systems are for small men with small penises. I'm not trying to exaggerate or make ridiculous claims, I'm just stating the facts. Men with less speakers get less from the ladies. Also, they suck at Tribes.

Allow me to give you a tour of my sonic setup. Ordinarily a 5.1 system calls for a front left channel, a front right channel, rear left and right channels, a center channel, and a subwoofer -- hence the name, five speakers plus a subwoofer. That's more than enough for pansies, but I plan on breeding.

I've got those five and the subwoofer, allright. Plus, a large, rotating, manhole-sized speaker mounted onto the ceiling. Then, buried underneath the floorboards, I have a special subwoofing device that's approximately 12 feet wide and uses the architectural supports of my home to help it generate the deep booming bass I need whenever I fire up a game of Tribes CTF. Often it makes noises so deep that only elephants can hear it. It requires an inch and a half of sheet metal to protect my harddrive from the industrial electromagnet contained within, illegal to operate in this country since '77. People foolish enough to wear metal watches or earrings into my study sometimes find themselves hurled painfully to the floor when I boot up. Moreover, the vibrations make a great diuretic.

That gives me a grand total of 6.2 speakers. But, as you know, I use an 8.6 system. Where are the other two speakers and four subwoofers? I'll give you a hint. Two of them are in my pants. Two line the headboard of my bed while a third is placed in a special acoustically-tiled cone-shaped antechamber custom built into the second story of my garage. The last one I haven't seen since our swimming pool burst, but I can still hear it whenever I make a capture.

One time my system attempted to notify me of an incoming email and blew the shingles off of my roof, some of them as far as the next county.

How does my wife feel about this setup? Oh, I think she was a little upset about the antique bureau that shattered the moment my speakers registered a direct Tribes mortar hit, but for the most part she sleeps well in the comfortable knowledge of her man's enormous sexual prowress, evendent to anyone with the ears to hear it.

Say that again? I can't hear you over the noise of my gums bleeding.

Impossible! How Could He Possibly Have Killed Me? My Bunny Hopping Was Flawless in Both Planning and Execution!