I make my living by selling things on Ebay 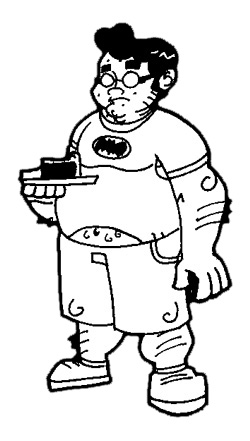 Good day fine sir. Would you like to buy a slice of pie over eBay? If you answered, "yes!" (and you should have!) then you're in luck; as I am none other than the one and only Master of eBay.

You see this slice of cherry pie? It was bought at a pitiful twenty-seven cents. By the time you can even begin to rationalize the point of buying a piece of pie, I have already resold it for (and I do not lie): THIRTY-FIVE CENTS. I know you want a slice of that tasty, creamy profit, but frankly I don't think you have the capacity to even comprehend the profit margins created by the virtual piggy bank of eBay. You see this watch? I bought it for two dollars from the blind five-year old next door and with the magic of advertising, sold it for a hundred and fifty dollars to a dim ruffian from Wisconsin. scrap compared to the pie, given that I sold it as a working titanium watch (I am not responsible for unrelated shipping damages of course). And then of course there's the time I sold my car on Ebay for fifteen grand (take that, welfare!) when the buyer didn't inspect the fine print stating "toy car actually owned by next door neighbor's blind kid". I am a ruthless capitalist, what can I say? Getting into a fist fight with one of those tough disabled five year olds is of course highly treacherous, and recieving a beating is a risk I purposely take every day.

Sure Ebay can try to take my cash, but they won't be able to get to my magnificent home. Being the genius I am, I have cleverly hidden my dwelling from the view of society by using my next-door neighbor's house as my mailing address! Not even my comrade at the local law enforcement who solved the mathematical equation to obtain individuals of the XX-chromosome (he's had like TWO girlfriends) is that clever! Indeed, I am the master of electronic bidding by the bay, and people must bend to my will over any object they want to obtain!

Recently, however, I have began participating in the risky, but profitable, markets known as Massively Multiplayer Online Role Playing Games, or MMOs for you pitiful plebians. I started small with Everquest, but I had lost an awe-inspiring item, which was later identified to be the key to the very existence of the server! In response to this misplacement, I lost my team Asian farmers I purchased for two dollars an hour -- apparently they had become one with the server and had gotten overwritten.

Which brings up another valid argument, you can't rely on anyone who speaks in emotes and broken "Engrish". Ever. Besides that single miniscule dilemma, one thing I did learn was to not destroy my market in a freak poorly-managed-dragon-array-accident again, no sir! I quickly set off to play World of Warcraft, only to find, to my dismay, that there is an Asian farmer population nearly quintuple that of Everquest's! Mortified by this sickening turn of events, I had to sell all of my gold for TWO CENTS CHEAPER. Terrible. Horrifying.

But now I'm coming back, ladies! I have found the jackpot, a game founded on concepts of vicious capitalism to such an extent that I can profit by simply trading goods! Most exquisite! This game is EVE Online and its potential capacity for the creation of money via eBay is most impressive, to say in the least. For example, this one man called me a "newbie" and I played along -- soon I had conned him out of nearly TEN CENTS WORTH OF INGAME CASH. All because of my charming wit. I simply dare you to best me in my never-ending cycle of clever market manipulation.

I will own this market.

[EDITOR'S NOTE: The preceeding Daily Victim was written by a fan, not Fargo.]

People Don't Believe Me Because My Name Is Sarcasm