That’s it, I’m through. I’ve decided to stop dating gamers. 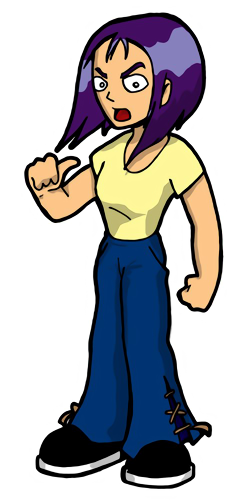 I used to love the gamer lifestyle. You couldn’t find an easier-going group of people. The harshest arguments they ever got into were about which Street Fighter arcade version was the best, and they were usually solved by doing a few shots and going to the arcade. And there were no mind-games when you dated gamers; they pretty much set it all out on the table yell “w00!” a lot. Plus I never had to bother upgrading my computer -- somebody always did it for me.

But that’s all changed! Ever since I got burned by that creep Crenshaw, I can’t imagine dating another gamer. I resolved that my next long-term relationship would be with... I dunno. An actor. A professional card shark. Maybe a jockey. Or a veterinarian.

It was hard to start dating again. First of all, all my usual hangouts were right out. I couldn’t chill with the guys at the Cybercafe. Forget the comic book shop or the gaming store. I had to try an all-new line of thinking.

So I went to this dive bar just off of Chestnut street. The kind of place where the smoke makes your eyes water and the music makes your ears bleed. Stapled to the rafters were old license plates and a bright yellow roadsign that appeared to say “Cariboo Crossing.” In one smoky corner some dude was hammering away at the sides of an Elvira pinball game. Nearby sat a bank of four Daytona driving games, occupying four drunk screaming guys. A fifth guy was leaning against a Golden Tee Golf machine, heckling the losing driver. I decided to steer as far from that group as possible. Sitting at table, apparently waiting for some friends, one sharp-looking guy sat alone hurling peanut shells everywhere. Time for the acid test! I sharply pointed a thumb over my shoulder, referring to the crowd at the arcade. “Morons, hunh?” I asked.

He hesitated for a moment, blinking the smoke from his eyes, looking me up and down. “Uh, yah,” he said. “Morons!” He was in!

Long story short, we hit it off. Even after I discovered that it was his friends at the Daytona machines, we still got along. He assured me that he wasn’t a gamer. We dated for weeks. I had to really rack my brains to come up with “non-gamer” dates. We ended up going to movies or eating at nice restaurants that weren’t Chuck E. Cheese. I won’t kid you -- it was tough. I kept wondering if The Getaway for the PS2 was any good. And my computer had gone for -- whoa -- nearly two months without an upgrade. That was just ... weird. I kept itching to play some games, but no! I was past that.

Finally one evening my new boyfriend invited me back to his place for coffee. Clearly he’d cleaned the place up for me -- I could see fresh vacuum marks on the rug. I poked around the apartment while he made banging noises in the kitchen.

Ah, a drawer beside his entertainment center. It was time for some old-fashioned boyfriend-snooping tactics, essential in any long-term relationships. I glanced over my shoulder and quietly slid the drawer open.

What did I find? Piles of adult magazines! And ... Videos! And underneath that ... it looked like some sort of leather harness. Some cans of whipped cream. A jelly mould in the shape of Christina Aguilera.

Pretty standard stuff, like any other guy I know.

But I was determined to snoop, so I dug deeper into the drawer. And what did I find? That’s right. A PS2, a modded Gamecube, controllers and nearly a hundred games. That sneaky two-timing ...

He walked into the room with two steaming mugs of coffee. “How do you explain THIS!?” I asked, pulling out a random pile of games. He froze in his tracks.

It was no good, I’d found out his dirty secret. I stared at the pile of games. “You rotten lying ... hey whoa. Is that the new Zelda game?”

“It’s an import,” he confessed.

“Can I play it before we break up?”

We’ve set the wedding date for next August.

You know, once you touch a man's Zelda, you've reached a level of intimacy that you can't really turn your back on.

Yo, Frank, can you please stop using obscenities as city names in Sim City 4?

My cat should be a Metal Gear “Fox-Hound” Special Operative.