I’m being hounded by some elf dude just ‘cuz I kicked his rear in Warcraft. 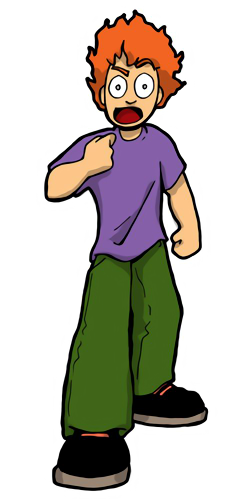 Things were looking bad with regard to me keeping my new year’s resolution to dominate in Warcraft III. I was in the middle of this grotesque battle, and then some elven whore smacked down my Death Knight, and he was in the middle of trashing my base when suddenly -- moments before he was about to win -- he disconnected. Woo hoo! It feels good to keep a new year’s resolution.

Towards the end of last week, though, I started to get emails from him. He was using a public terminal at the library to write to me, and claimed that his house blew up just as the game was ending. “Tuff luck, pointy!” I wrote back.

This weekend he started showing up at my house, waving a piece of paper in the air. He wanted me to sign a letter to Blizzard nullifying the match. “The disconnect is a black mark on my otherwise flawless Battle.net record!” he whined, standing under my bedroom window.

“Stuff it, Gaygolas!” I shouted, opening the window and barking through a bullhorn. “I won that game unfair and square!” After all, I had my new year’s resolution to consider.

Finally, just before I was about to break my new year’s resolution to stop putting buckets on people’s heads and then bonking ‘em with a rake, he announced, “You have ONE more CHANCE!”

I leaned out the window with my bullhorn and then blew smoke at him. “Good, does that mean you give up?”

“I’m warning you, I have friends in high places!”

“That’s because they had to climb up the tree to wrap their arms around the trunk,” I shot back. And with that, I slammed shut my window.

A few minutes later I hard a scratching and scrabbling at my door... and then nothing. The silence was almost creepy. I ended up breaking my new year’s resolution against hard liquor. That evening, I finally risked peeking my head out the front door -- the loser was finally gone.

But, gouged into my door and glimmering with a silvery sheen, there was an odd elvish symbol. I tried to scratch it off or rub it away, but I couldn’t quite get rid of the ink. I turned back to look outside at the shadows of the dark trees in the twilight. “MAGIC IS FOR PANSIES!” I hollered out. Far, far in the distance ... I heard the howl of a wolf. Swallowing hard, I darted back inside and bolted the door.

To calm my nerves, I decided that starting tomorrow I’d break my new year’s resolution against stealing wheelchair wheels from the elderly. A man can’t change overnight, you know?

There aren't any white tigers around here, are there?

But sir, Battle.net’s policy about disconnects makes no exceptions if your house blows up. It’s in the EULA.

Those movies not withstanding, I really think us elves are getting misrepresented in the media.