I am the King of Macros ... and I just met my Queen 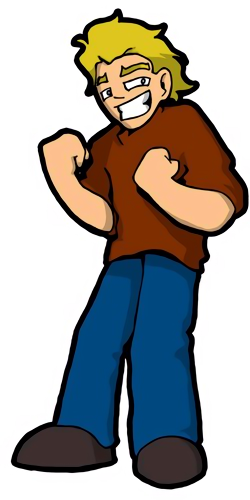 I’ve spent two years working on a complex system of macros and keyboard shortcuts that allow me to play Counter-Strike on an almost automated level. Sure, as you could tell by that debacle last week -- when I shot all of my team and jumped up and down on my own smoke grenade -- you know, there were some kinks to work out. But I was the KING.

This morning on the map de_dust it all turned around on me. As I was camping the bomb (I can hit Shift-B and then Alt-C at the beginning of the map to automatically buy weapons, run to the second bomb site, and crouch behind a crate), one of the terrorists burst around the corner and jumped while turning sideways, throwing a grenade, and falling into a crouch with the sniper rifle selected all in one smooth move. Of course I just pressed “A” and then the number 2 to fire on his position, killing him, naturally automatically going back behind the crate to reload while I took a sip of soda. But still, judging by that aerial display, I suspected that the Terrorist in question was using macros, as well!

Of course, I had saved up some chat macros for just such an eventuality. “Are you using macros and keyboard shortcuts to fight?” I asked, just by hitting Shift-T and the number 6. His answer came back immediately, implying that he had a macro set up as well. “Yes,” he answered. “In fact I haven’t touched the controls for two whole rounds of play.”

Wow, this guy was GOOD! But he couldn’t have been as good as I was. It was time to bust out with my most prized of scripts, the insta-automatic bomb-camp defense. I hit CTRL-backslash, and pressed “Y” when a warning came up on my screen. Then I activated the control code: 23 followed by shift-apostrophe. When the next round began, I just sat back and watched my scripts at work. My Counter-terrorist automatically hopped around lobbing grenades and shooting the shotgun at every conceivable terrorist hiding spot. It’s amazing what you can do with a few keyboard shortcuts, you know, if you string them together.

I saw his terrorist strafe, pick up the bomb, then jump up on a crate while throwing a smoke grenade the other direction. Of course I’d already anticipated that when I wrote my shortcut, so my macro shot toward the top of the crate with my shotty. Round over! I won.

What’s this? A NOSE on the SMILEY? That’s something a GIRL would do. Fortunately I had shortcuts ready for just such an occasion: I hit SHIFT-T followed by “F” and then the “1” key to ask: “Definitely! Hey, are you a girl?”

...and she was! Wow. I never even CONSIDERED that I would ever seriously have a reason to use my SHIFT-T F shortcuts, but I had over 200 stored in there useful for picking up on women over the Internet. I hit her up with a little SHIFT-T F 32, and then I dropped into the smoove SHIFT-T F 67s -- that’s hot stuff. No matter what I macroed, she had a macro response ready. This girl was a WILDCAT!

The advantage of using macros to cybersex is, of course, that you keep both hands free.