Duke Nukem was probably a better strip poker player than me 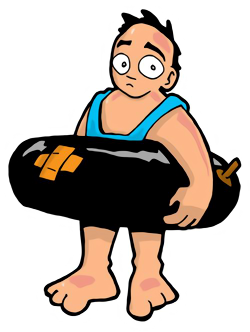 After I busted into camp Chimichango Duke Nukem style to rescue our chicks, I found myself in a seedy adult underworld. When the older kids wanted to play Strip Poker, what was I gonna say? Always bet on Duke. Sure, all I had was a tee-shirt, shorts, diving flippers and an inner tube, but I figured that was all the nest egg I needed to get all the girls to, as they say, SHAKE IT BABY.

On the first hand I had four twos, but they explained to me that two tens are better than four twos because they add up to twenty whereas four twos only add up to eight. I guess I shoulda made sure I knew all the rules of Poker before I started playing. I lost both my flippers on that one.

On the next hand I was stoked because I had a pair of kings, but one of the older kids pointed out that his King was better than my pair of Kings because he was also holding the Ace of Spades. Dumb luck. I lost my shirt.

On my next hand I had an Ace, King, Queen, Jack, and ten all of the same suit but wouldn't you know it some other kid had two aces? That's the highest possible hand. I lost my pants.

Unfortunately, the screaming of the girls brought in a mob of camp counselors. They busted into the cabin with the slam of the door, and they weren't at all happy about everyone being up late and in the wrong camp. "Who's responsible for this?" they asked. Naturally all the fingers in the room pointed to me. I lifted my hands in a gesture of surrender, which caused my wet, deflated innertube to fall to the floor, revealing everything for everyone.

So that's how I ended up in what I like to call "The Cooler." Fortunately, everything I ever needed to know about Summer Camp I learned from "Escape from Castle Wolfenstein..."

I sent my resume and portfolio to the Unreal team, unaware of what was to follow.