Having created the smartest AI to ever grace a computer game, I found it now necessary to bust it out of 'The Joint.' 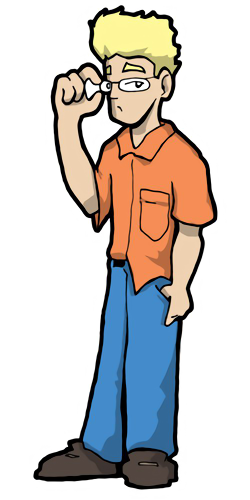 Ah, my dear journal, much has happened since I wrote my last sobbing entry. It's been weeks since my friends and I concocted an impressive Neverwinter Nights scenario and I created awe-inspiring artificially intelligent NPCs to populate our realm. It was perhaps the first time in the history of the human endeavor that a digital intelligence was busted by what some might call "The Fuzz."

Which is why I found myself making a pilgrimage to the maximum-security state prison facility in Maricopa County. I just had to visit my creations, to see first-hand how well they were adjusting to their captivity.

The guards searched me with rough hands and then gruffly told me I had only five minutes with my beloved digital children. They led me down a white corridor a hundred yards long, broken up by three separate barred gates each with electronic locks. The entrance to the maximum security wing was down a short set of metal stairs, guarded by a cinder-block room observed by prison workers through a Plexiglas wall reinforced by criss-crossing steel wires. Uniformed officers turned a crank to open a large steel vault-like door leading inside.

Beyond that massive door was a cube-shaped 30-foot by 30-foot room. Machine-gun armed guards were posted in each corner. In the center of the cell was a steel cage. The door to this cage had two deadbolt locks and an electromagnetic seal controlled via computer from above. Guards opened this door for me with a heavy clatter, and closed it behind me. For in the center of the room, on a bare metal table, sat my old PC and monitor humming away.

A game of Neverwinter Nights was visible on the computer screen. On the monitor I saw a large castle dungeon, a square room with a steel cage identical to the one I was in. On a bench in the center of this digital room sat the town mayor, the most complex of my Artificially Intelligent scripted game characters. I picked up the PC microphone and spoke to him standing, since there were no chairs in the cell.

"How goes it, my son?" I asked the little digital man on the screen.

He picked up his head from his hands and walked toward the bottom of the PC monitor. "Terrible, terrible!" he said. "When we were offered our one phone call, the guards caught me trying to escape with a dial-up modem. They separated the townspeople into cells within this dungeon scenario. A bad scene."

The tiny digital figure looked around, made sure none of the guards were looking, and then called up his inventory. "I've got the keys!" he quietly text-messaged to me. "Get us some broadband and we'll go over the wall!! We have big plans for once we get on the outside. Cures for diseases. Cold fusion. Ways for non-subscription websites to turn a profit without using pop-up advertising. WE'VE GOT TO GET OUT!"

I stuttered, a guard shuffled his feet, and the mayor hid his inventory. "I see," I said, trying to act nonchalant. The mayor, as well, tried to cover up any plans of wrongdoing.

"Time's up!" A guard bellowed. As they escorted me away, other officers slammed the cage shut with a definitive scrape of steel.

So, dear journal, I ask you to put yourself in my position. Was I to allow the greatest artificial intellect ever created to waste away inside that steel box? Or was I to risk my own frail analog life in order to set them free? No doubt men across the world have been caught in similar trials, but as for me, I couldn't live unless I took the risk.

Obviously breaking into -- and for that matter, out of -- a maximum-security prison was no triviality. I enlisted the help of an expert: my good friend Mike, the out-of-work server administrator, renowned for always having a backup plan.

He wasn't impressed with my plight. "You know, getting a potentially dangerous computer program out of a state-funded maximum security institute isn't just dangerous, it's stupid," he said when I brought the subject up. "But fortunately for you, I put together a quick backup plan for just such an eventuality. Here, take this Jehovah's Witness literature I put aside for just such an occasion. As you can see, within a lead-lined hollow inside of that bible I've stashed a wireless satellite modem..."

Apparently state law provides that prisoners can't be denied religious visitation. Dressed in new clothes and disguising my face, we returned to the prison facility and smuggled our modem inside. Fortunately the narrow barred windows toward the ceiling allowed us a modicum of reception, enough to get the job done. Because my minions had less than five minutes to evacuate the prison server, they all ran through a portal to the nearest server available. I didn't even stop to look at the rules of their destination. I figured they were smart enough to survive anywhere.

Hiding the wireless modem once again, we strolled out of the prison as casually as we could muster. Behind us on the little computer monitor a lone man sat on a mattress in a dungeon. It would be another hour before the guards realized that it was a straw dummy, and that there were no longer any NPCs anywhere on that server.

But where had they gone? At first, even I didn't know. But I assured myself, through long sleepless nights, that wherever they had gone they were tirelessly working to make the digital world a better place to live. Oh yes. Of that much, I was certain. These were creatures of my own image and intellect, but with no need to rest nor sleep. Great deeds were afoot. Great deeds, indeed! I can only imagine...

MY NEVERWINTER NIGHTS SERVER IS JUST A PLACE FOR CHARACTERS TO GET DRUNK AND PARTY
Awww, yaaah bay-bee! It was over a year ago that I announced my plan to create the ultimate rock-with-your-schlong-out wicked party server for Neverwinter. Dude, my plan was to be like the MTV Spring Break of the D&D world. Except it was like all-year-round thongs and scoring, werd! Anyways, it's already a hit. Like, check it, it was only running for a couple of days, and one afternoon like a hundred dudes and chicks come onto it from another server. They looked like CRAP man, but they were loaded with cash, and pretty soon they hit the buffet, and then like -- we're talking bras hanging from lamp-posts man. This server is JUMPING. Par-TAY! They still haven't left. It's like they do nothing but party 24/7. BITCHIN'!

Late at night you may sometimes find me, if you search about online. My character can be seen wandering the streets of darkened cities or the corridors of lonely dungeons, lantern in hand, seeking out my minions. I hope they're allright.