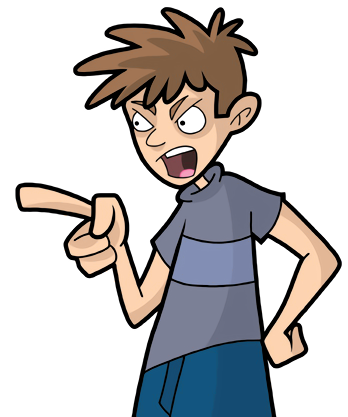 My mom gets more abuse on that frickin' Tribes server than she did when she was still married to dad!

Last night was the worst. So there I was, accidently defending an enemy command point. Cut me some slack. The point is, on the enemy team there was this heavy armor named "[DHead]Tony_A." So you know, I pull out my best line, "R U a chick?" And she says, "Yes I am, meatstud."

MeatStud! I'm scorin' big, you know? So right away I put down the can of hairspray I was sniffin' so I could keep a clear head, and I tell my roommate who just walked in that I was gonna make it with this Tonya chick.

Now my roomate is a total joke, right? He's only a couple of years older than me, it just seems like more since I've been in high school for almost eight years. He acts all big because he has a real job instead of my minimum-wage part-time deal at the paint factory, but the truth is, he just plays Asheron's Call all day at work, and he even brags about it. He doesn't even play Tribes, but he logs into the server anyway to meet my honey.

"Hey Tony!" he says. "If you think MeatStud is hot, wait 'til you meet his mom!"

At this point, my whole team just starts pilin' it on. My momma did this, they say, my momma did that. I'll say it before, and I will say it again: when my mom blocked off the entrance to the supermarket for an hour that one time it was not cuz her ass was so big she got wedged in the automatic doors, and they did not use the jaws of life to pull her butt out. She simply had a seizure 'cuz she forgot to take her methadone and they were afraid to move the body, okay? And another thing, my momma and I never "got it on," she stopped doing that kind of thing way before I was born.

But anyways, after that, Tonya was totally not into getting it on with me anymore. She just kept asking about my mom. All thanks to my roommate, who even offered to sell tickets if my mom and Tonya got it on -- nice one, dillsmack.

NO, you cannot have my momma's phone number! ...she never gave it to me.