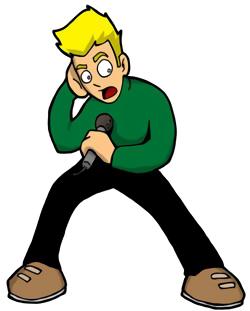 Are we on? We on the air? Hello - oh - Hello and welcome ladies and gentlemen, you've just tuned in and we're glad to have you here reporting LIVE from the observation mode of Bl00dlu5t's Tribes II server. It was on this very server no more than a week ago that Michael "The Monk" Bulman, AKA The Mad Monk, took his very first inaugural flight in a Tribes II vehicle and unleashed a torrent of destruction as one would shoot water from a hose, almost all of it completely unintentional. A grievous accident, as Mad Monk later claimed, after apologizing to friends and family of the deceased and recently respawned. He deeply regretted that incident and assured everyone he would not attempt another flight using an aerial vehicle.

But that's neither here nor there ladies and gentlemen, no, today we're to witness a historic feat of human will, Michael "The Monk" Bulman is about to attempt to use a Wildcat grav cycle to completely jump the mid-map chasm, sailing over the heads of no less than six teammates, that's more than double the world record, you're hearing it here first folks!

And here he comes now, he's cresting the hill on foot, this is only the third time he's played the game he's not yet accustomed to using the jetpack in fact this reporter isn't sure he knows it exists, but what a sight faithful listeners! There's a low mist in the valley and on the far horizon we can see the enemy base, just barely visible through the haze, it's shooting out beams from sniper rifles like some sort of Rock Concert light show, patchwork clouds above spaced enough to allow streams of sunlight to roll across the terrain, now The Mad Monk is stepping out of the shadow and into the light and there's almost a surreal peacefulness about the air here this bright afternoon. For those of you just joining us Michael "The Monk" Bulman is about to make a death-defying record-breaking leap over the mid-map chasm on Bl00dlu5t's Tribes II server, though nobody knows it yet but us.

Ah, he sees it! He sees the Wildcat cycle, it's glinting in the sun, the motor is purring away, The Mad Monk is examining the vehicle and he's -- yes, yes, he's stepping aboard! Cheers in the press room as he boards the Wildcat cycle for the first time in his abbreviated and often disastrous Tribes II career -- and you're listening to this historic moment LIVE as it's happening. There's a hush, yes, he's not moving, he's sitting very still on the Wildcat... There's some speculation among the crowd here, we're not sure what we're seeing. Some suspect he's lagged. Others are suggesting that he's trying to figure out how to get out of the Wildcat, or is unsure how he got in, or perhaps both. He's probably looking at his cardboard keyboard chart as we speak and WHOA, whoa, he just LUNGED forward about three or four feet and skidded to a stop. He's looking around, he's a little confused, but no, wait -- wait for it -- yes, he's turning toward the chasm! He's got the Wildcat facing the chasm and he's revving the motor, his teammates are running around below, they're preparing to defend a flag runner, someone's setting up a mobile resupply station down there they have NO idea I repeat NO idea of the grim foreshadowing that's transpiring a few hundred feet up the mountain, where Michael "The Monk" Bulman is about to -- what? Oh --

This just in! This just in! One of the Mad Monk's teammates is returning with the enemy flag, he's badly injured but soaring toward this same chasm from the other side. This is UNPRECIDENTED, a lone flag runner, returning to base toward this very chasm where Michael "The Monk" Bulman is about to attempt what surely amounts to vehicular suicide LIVE for a radio audience --

LOOK OUT! Mad Monk just punched the gas, he's roaring toward a ridge where he hopes to get enough lift to propel himself most of the way over the enormous chasm toward the enemy base, he's really pushing that craft to the limit. I can't even describe the sensation here in the booth as we watch this pivotal moment transpiring before our very eyes -- here he goes -- he's hit it! He hit the ridge at full speed, caught some air annnndd... nope, not going to clear it.

In fact, he's hurtling STRAIGHT down the mountain at nearly the speed of sound, he's got no control over his vehicle, at this point it's a flame-belching bowling ball, a dead-weight projectile rocketing into a cloud of teammates who have only just now paused to look skyward at this hideous metal contraption roaring toward them like a meteorite OOWWWHHH!! We've just watched a scout's limbs scattered to the four winds and OOWWHH that heavy just BURST like a WATERMELLON and now they're scrambling to get out of the way like cockroaches in a kitchen light, what's this? What's this?

The flag carrier has landed and is attempting to replenish his supplies at the mobile resupply station -- GET OUT OF THE WAY! Get out of the way! OOWWWH THE MAD MONK HAS JUST HIT THE RESUPPLY STATION, a mushroom cloud of molten metal just erupted from the scene of impact, teammates are running away, they're typing frantically, it's a scene of carnage and devastation here LIVE on Bl00dlu5t's Tribes II server where it appears that nothing remains of the flag carrier but half of a limbless torso whirling through the air and spewing blood into the sky like a Fourth of July pinwheel and wait! WAIT!

From the black billowing smoke emerges Michael "The Monk" Bulman! He's got the flag! He's got the flag! We truly are witnessing a momentous occasion, from the jaws of molten death The Mad Monk is alive and carrying the enemy flag, hang on, he's still running, he's running across the chasm floor, he's going TOWARD the enemy base, no, no I don't think he realizes he has the flag, in fact, I'm not sure he knows that this is a Capture-the-Flag game at all. He's yelling "Cover me, Cover me," his teammates are frantically typing to him, it's doing no good, Michael "The Monk" Bulman has a monitor resolution of 200x150 and can't see their text, now he's into enemy territory, carnage all around but he's stopping -- yes -- yes he's now pausing and he's about to attempt to resupply himself at an enemy turret OHHH! He's just been reduced to a sickening rain of colorful human confetti.

And now, only silence on the field of battle, well, silence but for the weeping. The weeping that I suspect will go on for quite some time. So much weeping, and ... the weeping. Now, back to the studio for some post-disaster highlights...

Next time, let's put this guy in Unreal Tournament and give him a redeemer.

The Littlest Orc: A Bedtime Story

Listen, mister! This here adventuring party doesn't stoop to "Chaotic" Evil, and we're not about to start.