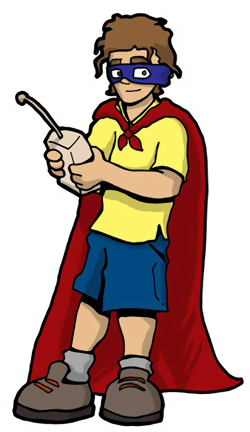 Last week when I discovered this old cell phone could wig out WaveBird wireless controllers, at first I was just using it to cause trouble. After my friend Doug and I ruined my neighbor's Resident Evil game, he found us out and kicked our butts. There we were, sprawled on the ground, me rubbing my head and Doug bleeding on the binoculars. That's when he said those fateful words: "Dude, what if you were to use the power of the cell phone for good?"

That turned over a whole new leaf for me. I started sneaking around the neighborhood, peeking in windows. I'd see kids playing Super Smash Bros., and getting beaten by their big brothers, so I'd step in to help. Beep beep beep! Victory! This enormous early-80s cell phone with its giant plastic case and huge antenna sends out radio signals like nobody's business. It's able to control WaveBirds no matter what frequency they're using.

From house to house we'd creep, looking for the downtrodden and needy and solving their games for them. Pretty soon I started using my motorized scooter to get around. A mask and cape were the next logical steps, being that I wanted to keep my identity a secret. I became ... The WaveBird Avenger.

But I always had a nagging feeling that I wasn't helping enough people. It was up to chance whether or not I'd peek into their window when they needed me the most. One night, while camping in the woods with Little Sidekick Man (that's what I've started to call Doug), I tried to brainstorm a solution.

"What if needy gamers shone a big light in the sky?" I suggested. "Or maybe they could fire up a flare?"

Little Sidekick Man waved a marshmallow above the flickering flames of our campfire. "You idiot," he said. "You carry a cell-phone. Just have them call you."

I leapt to my feet and threw my cape around my shoulders. "EXCELLENT THINKING, LITTLE SIDEKICK MAN!" I cried.

"I wish you'd stop calling me that."

That next morning Doug hooked up his color printer and we printed out signs to post all over the neighborhood. "GameCube Troubles? A hero can help! Hook up your WaveBird and dial 555-4789" Below I signed each and every poster with the stamp of the WaveBird Avenger.

It wasn't long before word spread. The big plastic cell phone would bleep its irritating ring, and I'd whip it out of its holster. "Speak!" I'd command. Someone on the other end would need help with a difficult Resident Evil area or Super Smash Bros. match, and I'd get their address. Cape billowing behind me, I'd drive my motorized scooter to an inconspicuous tree or dumpster near their house and solve a part of the game for them. They never knew how it was done -- the invisible hand of the WaveBird Avenger left no trace save for the victory on their television screens -- and then I was gone. As my fame grew, so did my workload. I went through cell-phone batteries like nobody's business and almost never got any sleep.

Then, yesterday afternoon, while heavy clouds tried to obscure the setting sun, something unusual happened. Little Sidekick Man and I were eating french fries on the sidewalk outside of ScaryBurger when the cell phone beeped. "Ah, our work is never done, Little Sidekick Man!" I beamed, putting the phone to my face and pressing the "receive" button.

"Stop calling me that," mumbled Little Sidekick Man, his mouth full of fries.

A telephone operator greeted me on the other end of the line. Her voice was muffled by the static that cursed the old phone. "I have a collect call for Mr. WaveBird Avenger from Bishan, Singapore. Will you accept the charges?"

I rose to my feet, spilling my Dr Pepper in the process. "Yes, yes I will!" I boomed. I turned to my companion sitting nearby. "Singapore needs us, Little Sidekic--"

A small, small voice now spoke to my ear, barely audible above the static. "Hello...? WaveBird Avenger...? Please, please help us. Our orphanage is poor and can only afford to rent one GameCube game a month. Eternal Darkness is due tomorrow but we haven't solved it yet. Please, can you help us, Mr. Avenger?"

"Most certainly Singapore citizen! I will help you ... it will be done! Call me back in one hour for instructions." With a beep, I hung up the clunky phone. "The people of Singapore have called upon us for aid, Little Sidekick -- uh -- Doug. Hurry up with those fries."

"We don't have enough gas in the scooter to get to Singapore," Little Sidekick Man reminded me, pointed a french-fried potato at the craft. "What are you going to do?"

Like any good hero, my mind was already formulating a plan. "All will be revealed in time, good man! You run to your house and get your GameCube. I'm going to buy up all the batteries I can for this thing. Meet me as soon as possible at Dave's house. ONWARD!" I fluffled my cape behind me, kicked my scooter on, and sped off. Time was of the essence. It was already tomorrow in Singapore!

Within half an hour a cluster of us sat in the shed behind Dave's garage. Dave was an amateur HAM radio operator -- not ordinarily a useful occupation in the days of the Internet, but today would be the exception. "Dave, can you boost the signal on this old cell phone?" I asked, stripping my mask off of my head. He gasped in astonishment.

"The WaveBird Avenger! I should've guessed the source of your power -- er, yeah. I can hook you up."

"Excellent," I said. "Doug, hook up the GameCube and start up Eternal Darkness. Once our friend from Singapore calls, we're going to tell him to start up his game as well. Then we'll start broadcasting. As I beat the game with this cell phone, the signal should travel around the world and the game should get beaten in that Singapore orphanage as well. THINK OF THE CHILDREN!"

Dave watched Doug hook up his console system. "Whoa, so that must make you Little Sidekick Man," he said. Doug shot him a look that would melt ice.

When my cell phone beeped, we were ready. I won't go into details -- it would sound like I'm bragging -- but let's just say there's nothing a hero can't do when he puts his mind to it. We took shifts playing Eternal Darkness and managed to beat it over the course of the next several hours, with just enough time for the Singapore orphanage to get it back to the rental place before late charges were applied. Our work here was done.

Doug and I, flush from victory, rode home and slept until noon. It wasn't until I woke up and started browsing the Internet news sites that I first considered the far-reaching consequences of my actions.

People all over the hemisphere with WaveBird controllers were returning Eternal Darkness to the stores in droves. Apparently there was some kind of freaky bug where the game would start playing itself. The publisher vehemently denied any problems but vowed to get to the bottom of things. As I took in this frightening news, my cell phone beeped.

Shortly afterwards my neighbor knocked on my door. He said he'd just bought Eternal Darkness last night and now the whole game was solved. "Thanks a LOT," he said. Then he punched me. It's hard to be a hero.

Whoa, guys, make sure you're not on any fault lines when you light that thing off...

Hello, sir! Allow me to demonstrate for you a stunning new way to roleplay without a PC!