My Super Smash Bros. skillz have led me on an odyssey to the lowest depths of humanity 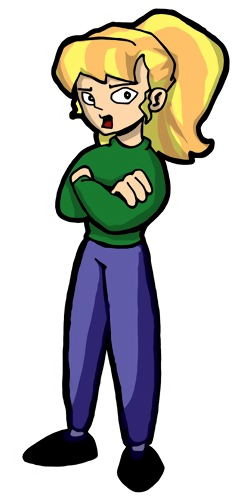 Ever since I was a teenager I've known that I had inhuman Super Smash Bros. skillz on the Nintendo. It caused some friction with my boyfriend and eventually caused a huge fiasco during a party on campus. I decided that I needed a little "me time" to come to grips with the dark arts that I possessed.

That very weekend, since my finals were out of the way, I hopped into my car, filled it up, and roared off to the freeway leaving a spray of gravel and an uncertain past behind me. My car was a beaten up '82 Nissan 280ZX, metallic brown, with a mismatched fender. Despite the rattle of the engine, it had enough kick to put a lot of distance between myself and my problems by the time the sun came up, illuminating a grizzled stretch of a state highway winding amidst scrub-covered hills. The cracked asphalt made my tires hum with a driving rhythm that eventually began to put me to sleep. I pulled over into the gravel driveway of the first sleazy motel I could find.

Neon hummed in the purple dawn, announcing that rooms were available (to be fair, the sign said "VA NCY"). The man behind the counter of the wood-paneled reception wore a faded ballcap and stared at me hard with crow-clawed eyes. Not many young women probably traveled alone in these parts. I could see it in the way he looked at me.

Keys in hand, I was on my way to my room when I heard the sound. That music ... it was from the mushroom kingdom stage. I heard an item fall onto the screen, then the smash of a box being opened ... that's right. The sounds of Super Smash Bros. Melee sent my blood pounding through my veins and sent any thoughts of sleep scurrying. In the room three doors down from mine, a little eight year old boy was playing the game, his head tipped at an unhealthy angle as he sat right up against the rickety motel TV cart. He turned and saw me standing at the door. "Wanna play?" he asked.

I'm not proud of what happened next. I picked the Princess, and he laughed out loud in that cackle that little boys have. "You're the Princess! Hah hah! I'm Bowser! Bowser RULEZ!" Taunted like that, I held nothing back. Turnips and toads got hurled like some kind of sick Catholic school punishment. With each successful blow I cried out "Take it! Take it all!" I totally drove that little boy and his turtle into the ground.

By the time his parents came back from the vending machines, they found us sitting on the floor playing, their son in tears. "What did you DO!?" they asked me, furious. I really couldn't explain myself. Skillz make you do insane things, you know? I learned a little something that morning, trudging to my tiny motel room in the rays of the morning sun:

Two days later and a few hundred miles north, I was wending down a little two-lane state road on the other side of the hills. Here the air was hot and free from humidity, and my drive was punctuated by rough sand and gravel tapping against the frame of my Z as I gunned along.

In front of me growled a weathered green pickup truck. Cars don't rust in this kind of climate, which was probably all that kept this monster on the road. The wooden slats that lined either side of the truckbed wobbled as the machine roared along. It belched black smoke and crawled along at 45, but I slowed down and didn't pass it. Why? Because ... almost invisible to all but the untrained eye ... there was a sticker on the bumper. A sticker of a Mario mushroom icon.

I followed slowly behind the truck, inhaling its choking exhaust, trying to make sense of it or to get a glimpse of the driver. Was this some kind of calling? A sign from above? Then, almost without warning, the truck veered off the road into the dirt and gravel parking lot of a weed-encrusted hovel of a bar. At first I drove on ... maybe a mile or more. But curiosity got the best of me. I wheeled around and drove back, pushing aside the orange rays of the setting sun with my visor. The bar was the most unwelcoming sty of a place I'd ever seen, but nonetheless I ground up to a parking space. Parked next to me was a blue Impala with a sticker on the windshield that said "I Rule Hyrule," along with the Legend of Zelda icon. The hairs on the back of my neck stood up as I made my way inside.

Smoke was thick in the fetid air of the dive. Two of the three pinball games were out of order. Guys with thick fur on their arms played pool in the dimly lit back alcove, pausing to look up at me and snort. The Jukebox played "Highway to Hell." In the corner above the bar, two enormous men in wifebeater tee shirts were watching Pokemon cartoons. When they saw me, they quickly flipped over to a hockey game.

I sat down at the bar and ordered a Rolling Rock. As they muscled bartender popped the cap off of the green bottle, I couldn't help but notice the Metroid Tattoo that wound up his bicep. Something was definitely going down at this place, and I was going to get to the bottom of it.

You don't get to master Super Smash Bros. unless you're able to keep track of fifty or sixty things happening simultaneously. I watched that room like a hawk over the next hour and a half. One by one customers came into the bar and eventually went to the men's room. The guys playing pool went there, too. Same with the big guys watching TV. Even the bartender stepped out, once his replacement came. But I counted each and every one. More people went into that men's room than came out of it.

As casually as I could muster, I made my way to the bathrooms. Was anyone looking? The biker guy with the eyepatch? The man with the wooden arm? The chubby truck driver wiping chicken wing sauce onto his tee-shirt? No? As quick as any of them could blink I pounded my way into the Men's room, clasping the door shut behind me. It was an ordinary bathroom, even though it reeked of filth and was covered in crust and hair. But it was empty!

Metal bars covered the window, which looked as though it'd been painted shut since the seventies. The door I came in was the only visible exit, solid wood with a broken mirror on the inside. One of the stalls was out-of-order, covered in police do-not-cross tape. With no other option, I kicked open the door to the out-of-order stall. The tiles inside were caked with filth, and the once-white toilet had red lines of rust running down its porcelain surface. But there ... on the lid ... was a picture of Pikachu. What did it mean? With a sweaty hand I reached forward and yanked on the handle of the toilet. With a lurch, the whole stall moved!

Gears gnashed and ground against each other as the toilet and the floor I was standing on lowered themselves into the basement. I found myself in a giant creaking room, whose wooden beamed ceiling rained dust as the people walked back and forth in the bar above. Bare light bulbs tied to several of the wooden supports lit the basement, throwing slanted shadows across the rough cement walls. In the center of the room, gathered around an old standalone living room television set, was a knot of the most wretched people I'd ever seen. The bartender stood before the front of the pack.

At last I saw the Nintendo GameCube sitting crookedly on the dirt floor, with four controllers strung from the front of the console. Four men grabbed these and started going at it on the Brinstar map. I was mortified at the level of competition; it was a bloody, smack-talking, fist pounding, bomb throwing, turtle-shell-using throwdown of a battle. The throng of men hollered and whooped and yelled until they were hoarse as the unrelenting match continued.

At last the sea of men parted as the bartender pointed at me. It was as though they took notice of me for the first time. They didn't treat me any different 'cuz I was a woman. No, they wanted a piece of the Princess. The bartender's fingernail was blackened, and quivered in the air between us as he pointed. "You," he said. "FIGHT."

I spread my arms, palms upright, tingling with anticipation. I made a "c'mere' gesture with my middle fingers and eyed the crowd. "Which of you bitches wants to throw down?" I asked.

The battle that raged over the next three minutes in that fetid basement changed my life forever. It's not important what happened. I mean, it was a real match, unlike any I'd ever played. It was a desperate, ear-pulling, drag out, monkey-punching, pokemon-throwing, barrel-smashing POUNDER. When I finally stood victorious in the center of the carnage, I was up to 168% damage and covered in sweat. The guys in the club were going nuts. They were rolling in the dirt, they were tearing their clothes, they were throwing beer bottles against the cement wall and howling like wolves in heat. Then, with an authority unlike any I have ever known, I set my sweat-covered controller down in the dirt.

"You know," I said, the light dawning on me for the first time. "I just realized something. You guys ... you guys are all weird!"

I'm not saying I've sworn off my skillz or anything. No, I'll throw down. But only when it needs to happen.

The kid wouldn't step away from the Zero Gunner machine; what's a guy to do?