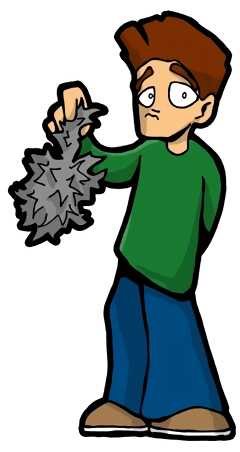 It's me again. You remember last week I was talking about that disaster where my girlfriend's chinchilla got stuck in a CPU fan? Believe me, things have gone downhill from there.

Even though we were able to save the little guy's life, he just wasn't the same. For one thing, little Bertie skulked around the house and hardly touched his hay or kibble, which put me in hot water with my significant other. But, even more importantly, he started to flip out every time he heard the noises of me playing Counter-Strike. I guess it just brought on flashbacks … the little guy would seriously wig, jumping all over his cage like the terrorists were after him.

After a week or so we finally got him calmed down, you know, by playing soft music and avoiding the CS for he time being. But Thursday rolled around again, time for our weekly LAN party. What was I going to tell the guys? Well, one thing was clear: no speakers. Everyone had to use headphones, otherwise the little guy would go berserk.

"Look, don't do it for ME," I explained, passing out thick padded headphones to all the guys. "Do it out of respect for the chinch."

So we all hunkered down around our PCs, even my girlfriend (who's a mean sniper, I might add.) You really had to crank the volume to really get into the game, but that was okay; our headphones were all up so loud it cut down on the cheating 'cuz the dead people couldn't shout out the locations of the other players. For HOURS we played, eyes locked on our monitors, faces an inch from the screen, headphones blaring, completely in our own world.

Then I felt a little scuffle by my feet. I looked down and saw two little eyes looking up at me. It was Bertie the chinchilla. I slipped my headphones off of my ringing ears. "Bertie, why aren't you in your cage?" I asked. I looked toward the table where he should have been safely locked in his cage.

To my surprise, the cage was missing. The table was still there, covered with broken glass from the nearby window. A crowbar was discarded nearby. I stood up to take stock of the room and discovered that my TV was missing. Along with my VCR and console games. And … my couch. And bedroom set. Empty white squares stared back at me from the walls where my pictures once hung. It was gone, all gone! My jaw hit the ground.

But nobody heard me.

We're trying to see if the Chinchilla can identify the perpetrators by mug shots. It's slow-going and, frankly, humilating for everyone involved.

Just because you CAN play the Mario theme song with your armpits, doesn't mean you NEED to.