There comes a time in every man’s life when he asks himself: What would Solid Snake do? 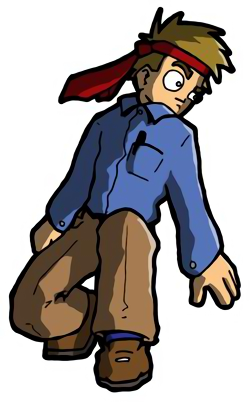 Not more than a week after I lost my access card and was forced to go Metal Gear Solid Freestyle in my office building, I once again had reason to call upon my Solid Snake prowess. It was a sunny afternoon, and as I returned from a business lunch with my laptop under my arm I decided to hit the restrooms before getting back to the daily grind.

But once I got to the second floor I was assaulted by the visage of Crenshaw standing just outside the door to the men’s room, wafting the air away with a copy of the Wall Street Journal. "Do not go in there!" he told me, then added a loud "woo!" for effect. Of course, it was too late for me; when a man’s got to go, a man’s got to go. What were my options?

Well, I had very few. I could go out, get in my car, and drive to the nearest Whattaburger joint or gas station ... or I could tuck my laptop case under my arm, flip silently around the corner, duck under a potted plant, tie my business tie around my forehead, and once again go Metal Gear Solid Freestyle. After all, there was a perfectly good ladies’ room downstairs, provided nobody saw me slip in there. Let me tell you, when you possess a science such as mine, the temptation to use it is often overwhelming.

Stacey from Accounts Receivable was manning her cubicle just outside the women's restroom doors. Not a problem – I quickly tapped on the wall with a fist. As she got up to peer around the corner, I had already slipped silently behind her. I was in!

I tiptoed over the linoleum, slid into the stall, and closed the door behind me with a quiet click. Success! I had infiltrated the ladies’ bathroom undetected. I quietly set my laptop bag on the ground and took care of business. Ah, sweet relief. But before I could wrap up my mission I heard the door open and the rap of high heels clacking across the tile floor. The situation had suddenly grown desperate; I had to take immediate action. Realizing my manly shoes would give me away and jeopardize the mission, I lifted them up and braced them against the door of the perfumed stall, quiet as a mouse. However, no sooner was one pair of high-heeled shoes washing up than another had entered the facilities. And then another. Pretty soon a little gaggle of shoes were doing each other’s makeup or something by the mirror. I had underestimated the ability of my female co-workers to turn a potty break into a social activity.

It's times like this – yes, times like this that a man has to ask himself: What would Solid Snake do? The answer of course could be found in tiny lockers up and down the East River. That’s right. Solid Snake would lie low until the heat had passed. So, I picked up my laptop, set it on my lap, put on my headphones, and fired up Dungeon Siege.

At first it was all going according to plan. But you know how it is when you’re playing a really good game ... you kinda get lost in your own world. Pretty soon, with the noise turned up on my headphones, I forgot that I was supposed to be maintaining a veil of silence. Unaware that the stall next to me was occupied, I killed a boss monster and approached a rack full of weapons eager to claim my prize. I could hardly contain my excitement. "Oh baby, oh baby YAH BABY! GIMMIE SOME BOOTY! SWEET ASS SWEET!" I shouted.

When they opened the stall door they found me, legs spread, pants around my ankles, laptop on my lap. The hardest part was trying to explain to Human Resources why I was wearing my tie on my head.

After work I told Crenshaw all about it. "Dude," he said. "I was that second pair of high heels, man. See, what you needed was an EXIT STRATEGY."