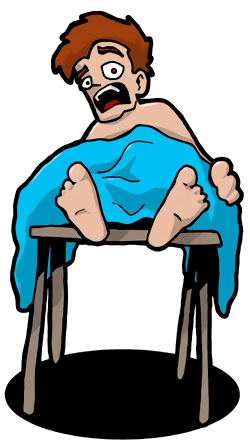 Having been hospitalized after that grievous Virtua Fighter encounter with Ivan the Terrible, life got extremely frustrating. For one thing, it took about an hour to go to the toilet. For another, I kept having nightmares about force feedback. Even worse, the IV tube was connected to the back of my hand and ached whenever I played Virtua Fighter 4. But by far the most horribly frustrating side effect of that painful PS2 controller removal was the fact that I was here, stuck in a hospital, while this sophomore named Ken was going around campus bragging about his Virtua Fighter 4 domination.

Apparently, Ken managed to hook up with some Koreans and scored some fancy new PS2 fighting game controller. He was kicking butt up and down campus, and I was stuck here in the hospital, unable to defend my reputation. No surprise that he wasn’t returning my calls.

Finally we managed to set up a match, but only ‘cuz I made a wager he couldn’t refuse. If he won, I’d turn over my VF4 CD and retire from the game. It took him a while to come up with a suitable counter-proposal; somehow he ended up wagering a crate full of panties(?). No matter. What I was after was pride.

The day of the big match came and he met me in my hospital room. By this time even the doctors and nurses were in on it -- they piped closed-circuit video of the match to the nursing stations so that everyone could watch, even a hundred or so spectators from campus. It was to be the fight of the month.

Imagine how stunned I was to find out that Ken’s top-secret Korean weapon was none other than a fishing controller. I figured I’d wipe the floor with this guy. But you know what? He had moves. Yeah, I give a man props when props are due. He had it down to a science, and the fishing rod prompted him to use an unorthodox fighting style that was hard to defend against. His whole body was into it.

Actually, that’s the problem. He would flick the controller up in the air to trigger off an uppercut, or flick it to the side to sidestep. It was the last round of the match, and I was winning, but I tried to pull my "dances with punches" move and he saw it coming. He intended to step quickly to the side and uppercut me. But what he did was fling the controller over, then in one swift motion he knocked over my IV stand. As it clattered to the ground, it yanked my IV cord out of my hand, spattering blood and searing me with pain. My controller flew from my hands and I howled out in agony.

Well, from there, it wasn’t about the action on the screen anymore. I wanted to apply a BEATING. I grabbed that stupid fishing controller from Ken and threatened to shove it up in a bad place, but several doctors restrained me and held me in the corner, panting. "You can’t shove that fishing controller up his wazoo!" they said. "It hasn’t been sterilized."

So they let me go.

Now ... what to do with all these panties?

You haven’t really played Virtua Fighter 4 until you’ve busted out the Shaolin style with a fishing controller.

This base has been in my family for years