My NEW Empire Earth scenario is more than unbeatable ... it's divinely inspired 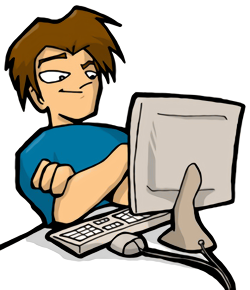 So, you remember my 'unbeatable' Empire Earth scenario? Yeah, no sooner do I release it to the net, than some guy writes me an email twenty minutes later saying it was way too easy. What a jerk! But, instead of getting all pissed off, I email him back and asked his advice. Lemme tell you, even though some people are real jerks over the Internet, sometimes you can find some pretty sharp guys out there. I mean, this dude was like an Empire Earth God or something. He let me in on a few tricks of the trade.

My new scenario? It’s like divinely inspired. When I hit the “load” button, this screen will fill with a heavenly light. That guy on the Internet was good. I wonder what he does for a living?

SO I TELLS THE GUY, “YOU CAN’T JUST SLAP A WORLD TOGETHER”
You gotta allow yourself about six days just to build the map, right? Then, I like to take a break. You know. Rest for a day. Afterwards, you begin what I like to call “the long beta test.” You can’t rush this. I didn’t build Rome in a day. Sometimes, if you don’t like what you’ve done, you’ve got to be willing to just flood the whole map with water and start over. Hey, you gotta do what you gotta do.

God bless America! In the land of opportunity, scooter-entrepreneurs like myself can score an easy Xbox.

It is man’s ultimate ambition to achieve perfect balance in life, in love, and in Tony Hawk