You Got to Fight for Your Right to Play 'M' Rated Games! Testify! 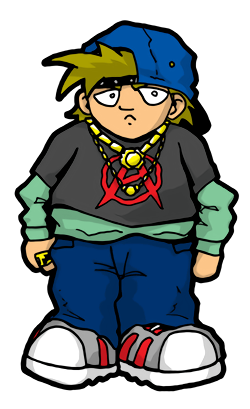 The Man wants to keep State of Emergency for the PS2 out of my precious little hands! Just because it's a video game about rioting in public places like malls. As if it's dangerous. Who wants that noise? It's like I told the lunch table: I may only be 11, but some hardcore poo is gonna let fly this weekend. It's like that time I was trying to get that Britney tattoo out of the vending machine but it gave me three *Nsync's in a row, so I yelled "Calm like a bomb!" and kicked it really hard. It's still crooked. Kip keeps it real like that, yo.

Now, you're my main man on this, you're gonna be like my trigger man, word. We're gonna put some serious hurt on The Man tonight for depriving the people of plotless, violent video games. Now, I've built a map of the mall out of Legos -- see, the little astronauts are "The People," and I used these Fisher Price Police dudes represent "The Man." See here? We start at Vinny's Pizza. Tim's gonna be waiting inside with Sarge the Puppy, and when the revolution begins he's gonna tip over the Cruisin' World arcade machine and yell "War Within a Breath!"

You and me? We're gangstas, bro. We're gonna throw a garbage can through the window! That's how you start a riot. Word to everyone's mother. Assuming you're gonna be able to hear it over the noise of the angry mob, I'm gonna yell "Year of the Boomerang!" and then there's gonna be all sorts of screaming and throwing things. You look confused, so lemme show you how it's gonna go down with these little Lego dudes: FIGHT THE POWAH! Whams! Auugh! Smash! Smash! Stuff is breaking! Oh oh! Pocket fulla shells! Unh! Unh!

THE REVOLUTION WILL BEGIN AS SOON AS I FINISH THIS GAME... OKAY, ONE MORE...
Me and Sarge the puppy -- uh, Kip says I should call him "Jaws of justice" from now on -- met the gang outside of Vinny's Pizza at the mall after school. I went inside and I was supposed to wait until they threw the garbage can through the window, then I was gonna yell "War Within Her Breasts!" and tip over the arcade machine. But once I got there, man, I saw the high scores had been reset. So I could totally get my name in first place! I figured we had time for one game before fighting the power. So I started playing the game while Sarge begged for food at the tables. I didn't get the record so I started playing again. I figured I'd hear when the garbage can came through the window, then I'd start to break stuff. You know?

I DIDN'T WANT TO FIGHT THE MAN, BUT ALL THE OTHER KIDS ARE DOING IT
Kip and I rode our bikes to the mall after school to "steak the place out." But instead of the steak place we stayed by Vinny's Pizza and waited for Tim to show. Kip had brought his yellow and purple "My First Sony" tape player, and when it was time to start rioting (according to my dad's watch), he started blasting his Rage Against the Machine tapes.

Oh, and I finally found out what "subversive" music means. Kip said it's music that makes you want to break stuff, but you don't know why.

Anyways, it was time to start the mall riot, so Kip tried to lift up the garbage can... but it was really heavy, so he fell over and garbage spilled out. Then he asked for my help, but the can was super hard to lift. Together we struggled and smacked it against the glass, but it didn't break. Then we all fell over. So, I started throwing garbage on the window -- I thought it was just as good. Once the can was almost empty, Kip started rolling it up and down the window. I wanted to help out, so I started smearing the garbage on the window with my hands. It was kinda fun.

After a while, Kip started shaking his fists at the people inside the pizza parlor and screaming over the noise of his subversive music: "JUSTIFY! JUSTIFY! JUSTIFY!" By this time we were both covered in garbage. Suddenly, he grabbed my shoulder and yelled, "The Pigs!" But I didn't see any pigs, only a police office in a golf cart.

A MOST CURIOUS THING HAPPENED DURING DINNER
I was enjoying the most delicious pizza pie and trying to ignore this puppy that for some reason was begging for table scraps. Suddenly I heard a thump nearby, and I saw a couple of children covering the nearby window with garbage. I couldn't hear a word of what they were saying through the glass, but they were clearly very excited about something. One of them started waving his fists, although nobody seemed to notice the disturbance but me. The lights were warm and dim, people were happily eating, and "Girl from Ipanema" was playing softly on the jukebox.

Nonetheless, I thought it best to notify the establishment owner, and inform him that he should call in the authorities. On hearing this, a small child playing a nearby videogame jumped up and yelled, "The Fuzz!?" In a panic, he ran out of the room, taking his puppy with him. Within moments, a uniformed official came speeding by on a golf cart. God bless the USA.

OOOWWWWHH!! MY LEGS! THAT BASTARD RAN OVER MY LEGS! HE DID THAT ON PURPOSE!
After more than three years camping out for the release of TeamFortress 2, I've seen some pretty weird stuff at this mall. But never as weird as today. Round about 6:30, a huge crowd had started to gather around the fountain near the software store here. Apparently the paperboy had scrawled a message on the local newspaper about a mall riot happening tonight, and people all wanted to get good seats so they could watch. It all sounded like bad business to me, but nothing violent happened until that damn mall cop drove by in his golf cart and RAN OVER MY LEGS. I think he did it on purpose! That kind of thing makes me want to break stuff.

EVEN WHEN THE SECURITY OF THE FREE WORLD DEPENDS ON IT, IT'S JUST SO DAMN HARD TO CRIPPLE CHILDREN
First of all, they're very small targets. Secondly, they're very fast. Thirdly, the parking lot outside the pizza parlor was for some reason covered in slippery garbage. I must've done five doughnuts trying to run those little bastards down, but they got away on their bicycles and headed for home. Little punks. Too bad real life is more like Wreckless and less like Grand Theft Auto 3 -- it's so hard to run people down, pounding their pulpy little bodies into the pavement where they belong.

But, though my heavily starched uniform may have been covered in crud, I knew that by driving off those kids I'd ensured the peace and safety of this retail domicile. Once again, citizens were free to shop freely, the wheels of commerce turning once again on the thick oily shafts of capitalism. I figured I'd go back inside and make an announcement on the PA system, so that everyone would know that their beloved mall was once again secure.

Residents remain stunned after a riot took place at the Palace Park mall early yesterday evening. A large crowd had assembled themselves in the center court atrium after rumors spread that several 11 year olds were going to stage a violent demonstration. As the minutes ticked away, the crowd became restless and was soon to disperse. That's when a garbage-caked mall security officer, name withheld, drove up in a golf cart and announced with a bullhorn that no riot was to take place. Upon hearing this news, the crowd became disappointed and unruly.

Police are searching for the instigator of the riot, a lanky unshaven man believed to have lived at the mall for several years. He was last seen tipping over a burning golf cart and hollering "TeamFortress 2 is a big lie!" If you see a man resembling this description, authorities caution residents to give him any flags you are carrying and to immediately feign death.

Yeah, so, I was at home playing Pokemon with Tim when I saw the riot on the news. But I wasn't there to loot me a copy of State of Emergency. Then Tim said he had a copy all along. Duh! So we played it, but it totally sucked.

Baby, I Put the ‘Romance’ in ‘Necromancer’