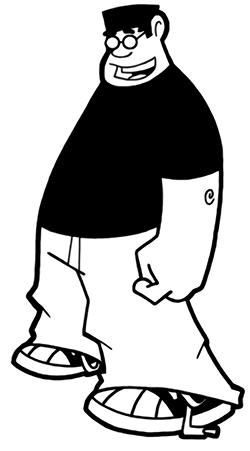 A lot of people agree that A.D.D. kids like me need special attention in order to get through our studies at school. But did you ever stop to think about how those of us with short attention spans can cope in the gaming world? It's a hard life, since most game developers don't realize what torture a loading screen can be or how hard it is for a guy like me to change maps without alt-tabbing out to check my e-mail and then bouncing on my chair until it breaks.

One time I broke my chair and thought I'd fix it with duct tape. I didn't have any so I used masking tape but it took a whole lot of it and I used up the whole roll and thought that maybe I could use the empty cardboard roll it came on as some sort of mouse-cord-holder-thing if I put a notch in it and it would roll across my desk. I'm always inventing things like that. Oh! That reminds me, I was going to tell you how I set up a computer for ADD kids like me.

First, you need to have three computers, just grab some old ones for email and MP3s. I used my mom's old Pentium 90. Actually, it used to be my older brother's from when he went to college. He was going to give it to me but then I broke my television and mom didn't think I had the "temperment" to keep a PC around but I showed her with my paper route and then I got a new PC with the money I saved before I was attacked by dogs.

DOGS! Why do people keep dogs? Big slobbery things. And they tell ME I can't sit still, ever try to deliver a paper to Maddock's down on 528? They have this big black dog-like creature with a head that's bigger than mine, I know because one time I measured it with my bicycle helmet. It was the first time I'd ever been to the hospital. They introduced me to Ritalin. God bless sweet, sweet Ritalin! Without it I'd never have made it past the tedious opening Cinematic of Diablo II. That thing was almost three minutes long.

What were we talking about again?

It's a great setup, but it needs more monkey bars.

Thanks to Unreal Tournament, I Was Kicked Out of the S.A.T. Exams

Spam Mail Is the Only Fulfilling Thing in My Life