My Clan Forced Me into the Grenade Clinic 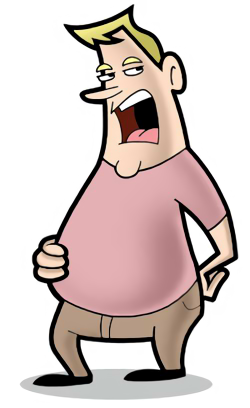 Last week we spoke briefly about my Crippling Addiction to TeamFortress Halleucinogen Grenades. Well, apparently I crossed some kind of line, and they had an "intervention" in our resupply room. They used that whole "you sold our flag to the enemy team to buy drug money" argument, I mean geez, can't they just let that drop?

Turns out there's a clinic for videogame disorders off in some old QuakeWorld server I never heard of. They told me I had to do the whole 28-day recovery program or they'd kick me out of our base for good. (What I didn't tell them was that I was going to use the speed cheat so that I'd be done in ten, heh.)

This place was a real nightmare, lemme tell you. Everyone met in a shadowy corner next to a big flaming torch at the bottom of Quake 1 DM1. It was run by some toothless freak who used to play Redneck Rampage all the time just to get drunk. "You know in those parts ya drank yer whiskey to get yer health back," he stammered in some sort of 'pep' talk. "But I didn't know when ter quit. If it didn't have three X's on 'er side, it just wasn't drinkable. Sometimes I couldn't even tell what map I wuz on, I was so messed up."

Then the guy next to me stood up and told his story. He would play Deus Ex constantly, and instead of trying to save the world, he was hookoed on the "Zyme" drug in the game. "I vaguely remember being in the New York level," he said. "I was supposed to meet my brother Paul in his apartment, at least, that's what the mission briefing said. But I found a stash of Zyme in some hole in the subway and I was doped out for hours with my screen all fuzzy. I just couldn't bring myself to care about saving the world. When I got there the men in black had killed my brother, and I remember thinking: SCORE! They left his wallet!" Everyone was nodding and clapping for this spaz.

MAN, what the hell. I was WAY better off than these freaks. All I did was steal our stupid flag, big deal. If I was gonna survive 28 days of this, I was gonna need a monster hit of some halleucinogen goodness. I snuck out the back door while they were going over the first rule of recovery -- "Trust that somewhere, an admin is in control of the server..." What a load of freakdom.

So there I was, on some weird Quakeworld server, trudging along, desperate for a hit of the happy grenade. I found some dark room with torches on the wall with some unusual decor -- a dead guy hanging from the wall. Man, people who play QuakeWorld deathmatch? THEMS the freaks, that's all I'm saying. But I was shocked to see, there in the flickering shadows of a line of square stone pillars, a grenade launcher.

Now, I know better than that -- you can't just go popping any old grenade you find, I mean, you don't know what could be in those things. I could O.D. or something. But I just had to have my fix. So, I pointed the launcher at the ceiling, let 'er rip, and prepared myself for what I hopped would be a mean buzz. The metal canister with the glowing red highlights glanced off the ceiling with a clang, then came to rest at my feet. It said "H.E." on the side in black stencil letters. I wasn't sure what that meant. A second later I was splattered all over the walls, and a few moments after that I respawned back in my clan's resupply room.

So now they keep me locked on the sniper ledge. Hey, are you gonna use that grenade? Can I have a whiff? Just one?

My Tribes Game Was Destroyed by an Errant Car Alarm

How Can I Possibly Use the Keyboard to Play Games When the Cartoonist Only Gives Me Four Fingers?