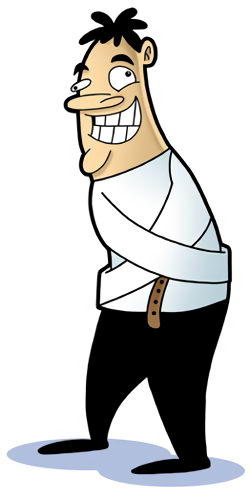 You recall last week when I told you about how Charlie's girlfriend got her Hootie and the Blowfish CD stuck in his Dreamcast, and the horror that resulted. The guy still hasn't recovered -- look at him. Eyes lolling about independently. Nostrils flaring. Murmuring "I only wanna be with you" whenever we asked what he wanted for lunch.

We decided that, as his friends, we needed to take decisive action. Harry's proposed solution -- booze and smack and fire engines -- didn't seem to apply here. That's when Greg suggested we email Hootie himself.

Well, I hadn't heard of anything so ridiculous, but since my idea of calling an exorcist was overruled we finally let Greg have his way. After all, by this time Charlie had started bopping his head along with "Let Her Cry," and as he did so long tendrils of drool were spilling in ungraceful arcs from his flopping lips. "Besides, what else is Hootie going to be doing?" Greg said. "It's not like they've made an album in ten years or anything."

Our email is answered

Turns out that the lead singer from Hootie and the Blowfish isn't named Hootie at all. I was livid about this deception. "Next you're going to tell me there are no fish" I proclaimed. One of my favorite childhood bands was turning out to be an egregious scam. Even Charlie -- who by this time had begun sticking his tongue to batteries if left unsupervised -- seemed a little upset.

But I'm getting off track. The point is, one of the guys from the band actually answered our email. "Sorry about your Dreamcast, dude," he said. "Tell you what, I'll stop by this afternoon and swap you mine. Deal?" Deal!

So he shows up, we drink a few buds, it's all good. He's a cool guy. Told us a few new Tony Hawk cheat codes. I even forgave him for the whole "No Hootie" thing. A couple hours later he drops off his Dreamcast, tosses Charlie's broken unit into the trunk of his car, and wishes us well. His taillights disappeared into the twilight leaving us with a profound sense in humanity's inner goodness. Excitedly, we unwrapped Charlie's Phantasy Star Online game CD and prepared to play. We sat him down in front of the TV. Good ol' Charlie -- we couldn't wait to have him back.

"Those Hootie dudes -- what great guys!" Greg says, popping open the replacement Dreamcast. "Good clean American artists, that's what they are." Suddenly we froze in astonishment. A CD had been left inside the unit.

We all felt ... a little bit unclean.

Sorry Guys, I Can't Play in Our Tribes Match Tonight. I'm Temporarily Unable to Use the Mouse and Keyboard at the Same Time.