Gamers like Myself Are Often Inconsiderate of Our Friends' Feelings, Particularly When We Destroy Them. 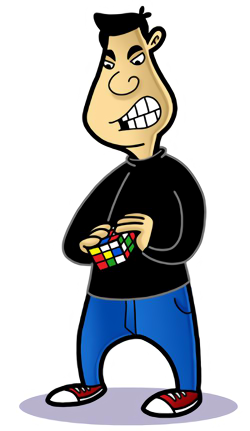 Hopefully you all recall last week when I Introduced you to my friend Ed, my hippie gaming buddy. He's not just an amateur inventor of games -- he once created a three-player version of pong where one player was the ball -- he's also a pretty hardcore player himself. Many an afternoon I found him sitting indian-style in front of his glowing monitor in his dome-shaped house, playing Black and White multiplayer and training his creature to play nicely with the others.

Sometimes I forget that Ed is of a little different stock than the rest of us. He'll spend weeks playing nothing but TeamFortress as a medic -- "They need me, man!" he'd say. "People are dying!"

After one particular gaming binge I saw Ed sitting in the corner of my favorite bar in a drunken, drooling haze, surrounded by empty bottles of Zima. His shoulder-length hair was dotted with peanut shells. "I coulda saved them," he sighed when I pressed him for details. "WHO?" I asked, concerned. He peered at me with bloodshot eyes. "The Counter-Strike Hostages, maaan!" As I pulled him away to call him a cab home, he pointed to the empty Zima bottles and insisted that someone recycle them.

That being said, Ed still gets on my nerves on occasion. Last week you'll recall that he Created a new type of puzzle game, based off of the Rubik's Cube. I spent hours trying to solve it before discovering that he put seven colors on a six-sided cube. See, that's exactly the kind of crap that he's always trying to pull -- he's always trying to teach us some sort of "moral lesson." Like here, he was probably trying to tell me that I shouldn't always strive to "win," I should enjoy the constant struggle and betterment of mankind.

WHAT A BUNCH OF CRAP!

I don't know about Ed, but I was put on this Earth to kick ass and take names. And damned if I was going to let his stupid puzzle game teach me anything.

So... I worked at it... for hours. My palms were raw and my fingernails broken. At one point I actually had it in my mouth. But you know, I licked it! Er, not with my tongue. I mean to say, I actually beat it. See, what I did is I played with it until there was a single stripe of a different color running through the center of each side. All seven colors fit perfectly and it looked exactly as if it was meant to be that way. Heh. Hehe. I won.

Ed came home, stepping into his house (he had no actual front door to open) and parting his stringy hair. "Dude! What's up brother?" he asked. And instead of answering, I threw the cube at him.

"I WON!" I said. "A WINNER IS ME!" I stood on his coffee table, and began dancing violently -- bouncing his rock garden to and fro. "VICTORY is MINE! You got OWNED hippie cube boy! Ha ha ha ha! I am a WINNER! You are a LOSER!"

Maybe I got a little carried away. I stopped talking and simply pointed at Ed and laughed and laughed. Gradually I got quiet. Ed was looking at the cube. And when he looked up at me, a single tear rolled from his eye -- like that Indian in the commercial.

Wow, a Whole Quarter. What Shall I Spend It on? a Driving Game, a Fighting Game, or a Light Gun Game?

Getting Those Tiny CD Headphones Lodged in My Ear Wasn't the Worst Part of My Day...