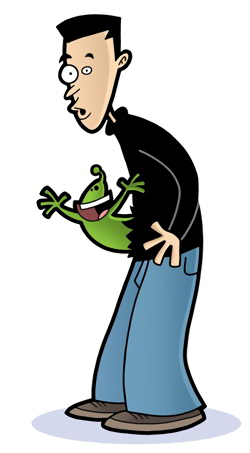 I was taken aback by the amount of support I got when I publically admitted that I would rather have an alien pop out of my chest than undergo another Tribes 2 delay. One gentlemen was even kind enough to send me the Alien Handpuppet He Uses to Contact the Mothership. Thank you, thank you all very much. I will now answer questions from the audience.

How Can I Get an Alien of My Own? - Gary Roddenbaugh, NC

I'm sorry, Gary, I can't say. I remind you that I didn't actually have an alien burst out of my chest; I merely stated that it would be preferable to another Tribes 2 delay. However, if you're serious about the alien thing, I recommend finding wreckage of crashed extra-terrestrial vehicles and eating any greenish or biological-looking substance you could find. Good luck!

Are you going to name the alien? - AzlinX, Via GameSpy Arcade

I was thinking of maybe going with "Samuel" or "Ian."

Do you think that it would hurt more if you had eaten a lot of salsa or lemon-juice before the alien burst from your chest? - shaithis, CA

You raise some excellent points. However, I've been asking around, and the consensus seems to be that the pain of the alien actually bursting forcefully through your bowels and out of your abdominal cavity would be so overwhelming as to negate any possible side effects of burning or itching caused by diet. Now, on the other hand, if you were asking if my opinion would change, I can say with confidence that it wouldn't -- even if I'd eaten spicy foods, I'd still rather go with the alien than another Tribes 2 delay. After all, there's always Pepto. That's what mom always used to say. Before the accident.

I am sorry to say i am loosing faith in this newly founded religion, which is gaming. I would go as far as to say that 95% of all new games that are made suck A**. Maybe its because i have very high standards, and belive in a Matrix sort of gaming world. I think that VR should be a very important part of gaming...but is not, not yet anyways. But i do have hope i my fading gaming soul..and that hope is: BLACK & WHITE!!!

Whoa, back off, asscheeks. What I read here -- and forgive me for reading between the lines but that's just the type of guy I am -- is that you think that the original Tribes sucks.

I'll tell you what, VR dude with the high standards. Once I get my alien -- and it may not be long now -- I'm going to breed him specially to go after punks like you. That's right. You'll be at home some day, flipping through the latest Electronics Boutique catalog with your pants around your ankles, and you'll be thinking to yourself "All these games suck!" and suddenly you'll hear a scraping outside, a clawing scuttle along the dried leaves of your run-down home. All at once, as the creeping flush of terror runs up your body, you'll wish that you hadn't have been so brash as to come down hard on the dude who had an alien come out of his chest. You'll rush to the garage door in an effort to make a clean getaway, but when you flip the light switch it won't come on. Instead you'll see the beady red glare of two alien eyes staring at you from the rafters, and the glint of moonlight through the alien-shaped hole in the aluminum siding. Too late you'll try to close the door, but before you know it he'll be on your face, and you'll think to yourself as your consciousness slips away that maybe you should've given the Fallout Tactics Demo just one ... more ... chance.

Hey dude with the Alien, which would be worse: Another Tribes 2 Delay, or waking up inside a tank discovering that your body had been cloned and your mind replaced with a cybernetic brain-simulator programmed to mimic your every action? - Ted North, NY

Now you're just being silly.

Pardon me, I'm going to go eat some fish eggs.

Watch Me Now as I Sing along with the Deus Ex Theme!

We Have to Cross Out 'Fun,' It Just Didn't Fit in with Our New Game's Business Model